Paul Simon, at 74, may be winding down concerts

Paul Simon, at 74, may be winding down concerts 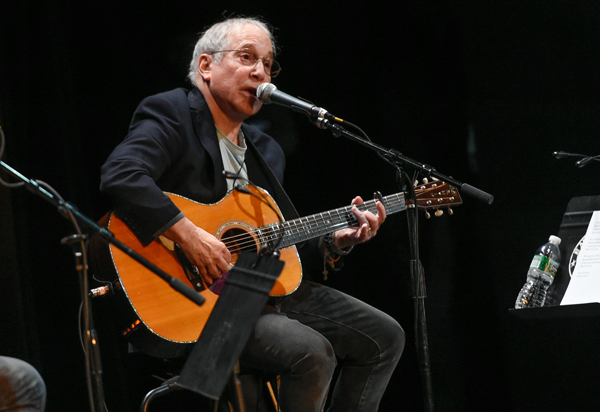 In this Oct. 6, 2015 file photo, Paul Simon sings at a Country Music Hall of Fame benefit concert in New York. Simon is ending his North American tour with two gigs in his native New York. During the first Thursday, June 30, 2016, at Forest Hills Stadium, he made no reference to an interview he gave earlier in the week where he talked about retiring. [AP/NEWSIS]


NEW YORK - If Paul Simon is serious about calling it quits, he didn’t let on to a hometown crowd.

The first of Simon’s two concerts in his native Queens, the conclusion of the singer’s North American tour, took on an added resonance when he mused to The New York Times in an interview this week that he may be nearing retirement. Simon turns 75 in October.

Simon didn’t address the subject Thursday in a two-hour show at Forest Hills Stadium. With nearly 60 years of music to choose from, Simon’s heart - and much of his song selection - seemed to be in the period of multicultural exploration from his “Graceland” album on.

“It’s kind of a time warp,” said Simon, looking up at the sky over the U.S. Open tennis tournament’s former home. “I’m trying to get over whether it’s strange or just a beautiful dream.”

The audience loudly cheered references to New York City in his music - a New York City winter in “The Boxer,” the Statue of Liberty in “American Tune.”

After getting people dancing to “Me and Julio Down by the Schoolyard,” Simon slyly noted, “and I know just where that schoolyard is.”

He grew up in Forest Hills, Queens, and was 15 when he and a school buddy, Art Garfunkel, had a minor hit with the song “Hey, Schoolgirl” under the name Tom and Jerry.

The folk-rock duo they formed under their own names was among the biggest-selling acts of the 1960s.

Simon, the writer of the duo, went on to a fruitful solo career capped by this spring’s “Stranger to Stranger.” The album was praised by critics and, somewhat surprisingly in a youth-obsessed industry, also has proven to be a commercial success.

Simon and Garfunkel have reunited occasionally in the more than four decades since breaking up, with their last show together in Forest Hills Stadium. The two are now estranged, and no reference was made to Garfunkel on Thursday. Simon played only two songs from their collaboration, “The Boxer” and “Homeward Bound.”

Simon’s nine-piece band skillfully navigated the swath of musical territory Simon explores in his music, from Africa to Brazil to Peru to New Orleans to Memphis and, of course, to New York. Simon covered Elvis Presley’s “That’s Alright, Mama” and dedicated it to Presley’s former guitar player, Scotty Moore, who died this week.

Some of Simon’s folk-era songs were given a new spin, like the bluesy take on “Slip Slidin’ Away.”

He ended the night in a guise familiar to many of his older fans: alone on stage with his acoustic guitar, singing “American Tune.”

After a show Friday in the same venue, Simon is booked for a European tour this fall.
AP