Disruption is only way ahead, says SK’s Chey

Disruption is only way ahead, says SK’s Chey 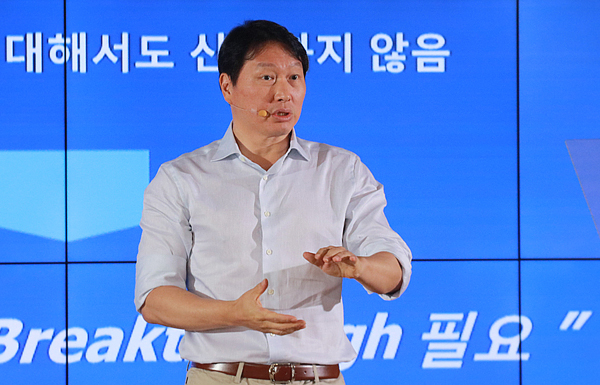 SK Group Chairman Chey Tae-won on Saturday called together CEOs and executives of 14 subsidiaries and urged them to “change and disrupt,” as a slew of negative external factors including Britain’s exit from the EU are expected to make the second half of the year tough.

“Unless we transform ourselves in this low-growth environment, we will fail to achieve stability and growth, ultimately threatening the happiness of not only SK employees but also various groups of people involved,” he told attendees of the “2016 SK Group Expanded Meeting” on Saturday at the SK Management System Research Center in Icheon, Gyeonggi.

“The very reason I am seeking an overhaul is to create a bigger happiness and share it with society. Those companies that do not change in the current management environment may face ‘sudden death,’ instead of a ‘slow death.’”

SK Group said Sunday the tycoon urgently organized the meeting a day earlier as the nation’s third-largest conglomerate by assets has faced a slew of challenges ranging from the United Kingdom’s unexpected decision to leave the European Union to lowered national economic growth and exports shrinking for 18 consecutive months.

To make his message more appealing to the audience, the 56-year-old chairman adopted a TED Talk-like speech. He wore a shirt without a tie and beige chinos instead of a tailored suit. He used a wireless microphone and presentation materials were shown against a backdrop on the stage.

Chey brought up in a scathing manner the reality of various management-related statistics, which he assessed were at a “serious level.”

“SK currently has low return on equity (ROE) and the private book-value ratio (PBR) at the majority of its subsidiaries fall short of 1,” he said. “Under such a situation, we can’t be happy, nor can we spread happiness to society.”

To tackle the problems, the CEOs were advised to change their method of business - who, what and how to sell - as well as the way employees work, signalling big changes at the chaebol in the near future.

“We need to raise question about everything - from the commuting culture, which we are very familiar with, to working hours, vacation, compensation system and overall rules,” he said. “We can break the frame only when we drop the inertia and look at the way we work with open eyes.”

He also said the group should manage its assets “more efficiently and flexibly,” a prerequisite for long-term management success.