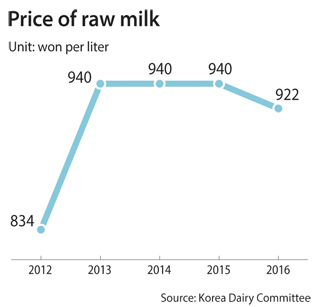 Milk was once a staple in many homes in Korea, but its popularity has fallen as prices rise and other dairy and beverage choices increase. Dairy farmers are fighting back by collectively lowering the price of raw milk.

The Korea Dairy Committee, which has controlled prices in the industry since 2013, said last week it would cut the price to 922 won from 940 won per liter. The price controls, linked to production costs and consumer price inflation, were an attempt to assuage angry farmers; the price has been set at 940 won for the past three years despite falling demand and a glut of supply. The price cut is effective in August and will be fixed through July 2017.

The committee is composed of representatives of dairy farms and the processing industry, and has one member from academia.

These days, consumers have become just as unhappy as dairy producers were four years ago. Even after the milk glut became obvious a year ago, the committee seemingly ignored supply and demand economics and is seen as protecting farm interests at all costs.

For example, the country’s stock of powdered milk hit a 12-year high in 2014, but the raw milk price was unchanged that year.

By May of this year, more than 17,000 tons of milk powder was in Korean warehouses.

Farmers are adamant about not cutting milk production, a course that food manufacturers and distributors favor. Consumers are caught in the middle, because even with the supply overhang, the sticky price has allowed middlemen to increase prices on retail dairy products.

The average retail price of one liter of fresh milk was 2,549 won ($2.20) on June 28, according to the Korea Agro-Fisheries & Food Trade Corporation. Prices in many countries, including Japan and the United States, are on average below $2 per liter. In Korea, the retail price of milk is more than twice the raw milk price, although it is unclear how much, if any, of that margin is monopoly rent.

The committee apparently bowed to growing pressure for lower wholesale prices, but the reduction was very modest.

“I am not sure if the 1.9 percent decrease will lead into a dramatic price change,” said a source in the dairy industry who spoke on the condition of anonymity. “Distributors and dairy farmers should give up some their profit, but I am not sure they are willing to do so.”

Some consumers who are aware of the situation say the fundamental problem is the price control system. “It makes no sense that those in the dairy sector come out and decide prices,” said Kim Seon-hye, a 27 year-old woman. “They have their interests and they all want to raise or at least maintain the current price for their benefit. This time, they decided to lower the price, but it was after years of complaints. Because of the high price of milk, I’d rather have other options.”