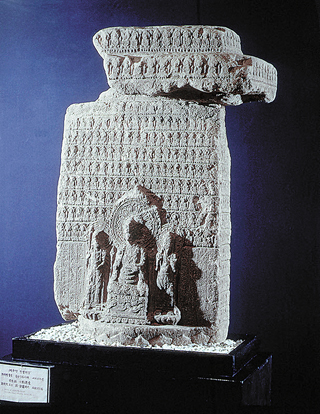 Name: Stele of Buddha Triad and a Thousand Buddhas with Inscription of the “Gyeyu Year”

Discovered at a Buddhist hermitage called Seogwangam located in Jochiwon, Yeongi-gun in Chungcheongnam-do, this monumental stele is filled with Buddhist images and inscriptions carved in relief.

It features a Buddha triad carved prominently on the lower part of the front face with its sides filled with inscriptions.

The rest of the front face, the rear and both sides are covered with carvings of tiny Buddhist images.

The Buddha triad placed on a semicircular base decorated with lotuses features a principal Buddha seated on a cubic pedestal with two acolytes on both sides.

The Buddha is heavily damaged, losing most of its details except for the robe that covers both shoulders, which is drawn down to cover most of the pedestal.

The two bodhisattvas attending him are also heavily damaged, but their inner robes crossed over the knee, which shows that the monument was made during the Three Kingdoms Period (57 BCE - 668 AD).