Malaria rates up 80% along border

Malaria rates up 80% along border 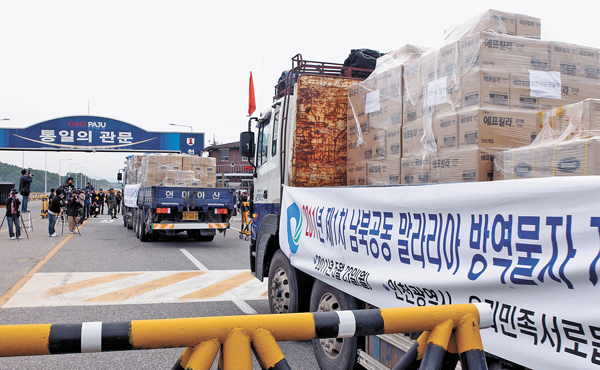 A truck boarded with malaria prevention equipment passing the Unification Bridge in Paju, Gyeonggi, in May 2011. [JOONGANG ILBO]

The number of people in Korea infected with malaria jumped by more than 80 percent from 2013 to 2015, with experts suggesting this may be a consequence of terminating the joint antimalarial project between the South and the North.

The type of malaria most commonly found in Asia is caused by the parasite Plasmodium vivax, which is carried by the female Anopheles mosquito. Symptoms of the disease may include fever, breathing problems, seizures, coma and possibly death.

South and North Korea began the joint project to combat malaria in 2008. Gyeonggi, which is more prone to malaria than other regions due to its proximity to the North, agreed with the Korean Council for Reconciliation and Cooperation to provide the North with equipment such as mosquito nets.

The two also agreed to take measures to combat malaria every year from June to September, when mosquitoes are most active.

The region carried out the project with the Korean Sharing Movement, a Seoul-based nonprofit organization that provides aid to people in the North.

Korea had been supporting the World Health Organization’s antimalarial project in the North, but the joint project proved far more successful; the number of people infected with malaria in Gyeonggi in 2007 was 1,007, whereas after the initiation of the joint project, that number dropped to 490 by 2008, according to the Korea Centers for Disease Control.

The Gyeonggi Provincial Government continued the joint antimalarial project by investing some 2.1 billion won ($1.79 million) until the end of 2011. As a result, the number of malaria patients in the region fell that year to 382.

Despite the sinking of the Cheonan warship in March 2010, the bombardment of Yeonpyeong Island by North Korea in November of that year and the May 24 sanctions on the North that followed, the joint project to combat malaria continued until 2012, when support for the project ended. The number of malaria patients since 2012 has been steadily increasing.

The number of Anopheles mosquitoes in the 12 northwestern parts of Gyeonggi has fallen by about 75 percent from 2012 to 2015. Experts therefore believe that the increase in the number of people with malaria is due to insufficient antimalarial efforts by the North.

“The number of mosquitoes transmitting the parasite that causes malaria increased in North Korea due to its lack of antimalarial efforts,” said an expert who spoke on condition of anonymity, “and those mosquitoes come down to the South.”

The Gyeonggi office and other civil organizations agreed with the Academy of Medical Science in North Korea to resume the joint antimalarial project in 2015, but the plan was overshadowed by the hostile atmosphere between the two nations following the North’s fourth nuclear test and multiple missile tests since.

The late Park Jae-won, professor at Gachon University’s medical campus and an expert who used to advise the WHO on malaria issues, once said before he died, “It’s important to manage North Korea to prevent the spread of malaria, and it’s crucial to supply the North with the materials it needs to do this.”

“Although a proper epidemiologic study hasn’t been conducted yet,” said an official from the Gyeonggi office, “we believe that ending the joint project has caused the rise in the number of malaria patients.”

Lee Young-jae of the Korean Sharing Movement said, “North and South Korea’s joint measure to combat malaria has to begin again as soon as possible.”