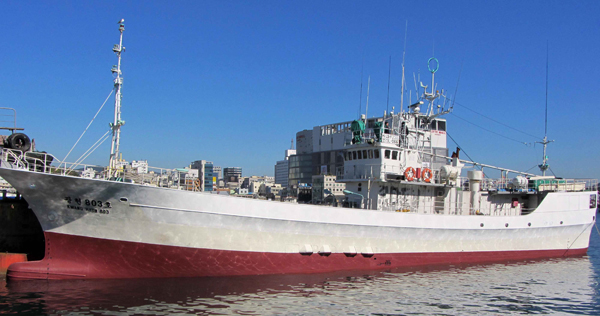 Kwang Hyun 803, a deep-sea fishing vessel operating in the Indian Ocean, on which the Korean captain and chief engineer were killed. [NEWSIS]

BUSAN - An investigation into the two Vietnamese crew members charged with killing a Korean captain and chief engineer on a fishing boat in the Indian Ocean showed they urged other crew members to join them in their alleged crime but were rebuffed.

According to the Busan Coast Guard, Kwang Hyun 803, a deep-sea fishing vessel operating in the Indian Ocean, sent a report on June 20 that its captain and chief engineer were killed. The incident was initially reported as a mutiny by local media. An ongoing investigation showed that two crewmen brutally killed the captain and chief engineer, both Korean, while under the influence of alcohol.

They were subdued by the navigator, the only remaining Korean on the ship at the time. Investigators are further questioning the suspects, who were flown to Korea on Thursday, about their motives.

The ship left Busan’s Gamcheon Harbor in February 2015 with 18 crew members including seven Vietnamese and eight Indonesians. The Koreans on board were the 43-year-old captain surnamed Yang, a 42-year-old chief engineer surnamed Kang, and a 50-year-old navigator surnamed Lee.

According to investigators, the captain held a party on June 19 to cheer up the crew and thank them for their hard work in hot weather. Intoxicated, the suspects, both 32-years-old, slapped the captain several times. They allegedly urged the other Vietnamese crewmen to help them kill the captain and the chief engineer.

The other five Vietnamese refused and threw two knives the suspects possessed into the sea.

Then they allegedly decided to kill the remaining Korean, the navigator, Lee. He wrangled with the suspects on the deck and managed to suppress them. He also managed to take away the murder weapon.

Ordering the rest of the crew to lock up the suspects, Lee acted as captain and sailed the ship to Victoria Port in the Seychelles. The ship reached port four days later and was met by an investigation team from the Korea Coast Guard.

According to investigators, Kwangdong Shipping of Busan is the operator of Kwang Hyun 803. The company replaced its captain in April.

Investigators said the two suspects took unauthorized leave from the ship at a port after Yang became the captain. Indonesian and Vietnamese crewmembers told the Coast Guard they received no violent treatments while aboard the ship, although some tough language was used.

The captain reportedly warned the two suspects that they should go home because they were hard to control. Investigators said that could have triggered the two men.

One of the two suspects had a criminal history of violence in Vietnam and he is admitting to the murder charge. The other suspect is denying it.

Detention warrants were issued on Friday.