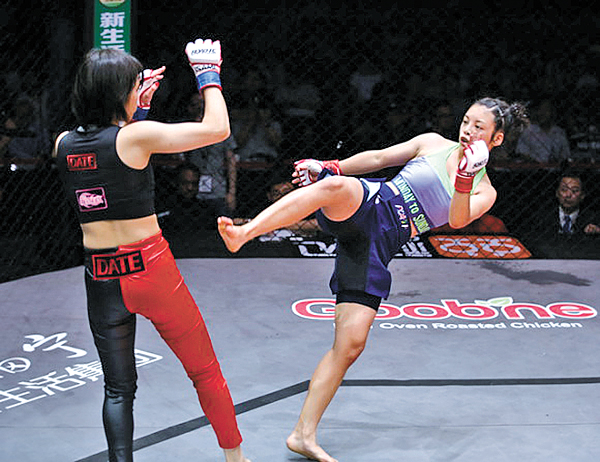 Lee Ye-ji is the latest rising star in Korean mixed martial arts (MMA), and while this is a path that brings ample pain, when trouble knocks, this 17-year-old fighter doesn’t flinch.

During Road Fighting Championship 32, held on Saturday at the Hunan International Convention and Exhibition Centre in Changsha, Hunan, China, Lee slugged it out in the octagon with Japan’s Hana Date, trying to grab the second win of her career. By the end of the match, Lee emerged with a majority decision win.

A dogged combatant, at 5 feet 2 inches and 99 pounds, outside the octagon Lee appears to be just another high school girl. The difference is that her face is often battered and bruised. But when asked whether it hurts, Lee said with a smile, “If you’re afraid pain, you cannot be a professional fighter.”

Lee showed great talent and athleticism from an early age and coaches from the judo, track and field, badminton, weightlifting and aerobics teams all tried to recruit her.

“I used to be able to run faster than the boys,” recollected Lee.

But everything changed when she was in her final year in middle school. In the summer of 2014, she began MMA as a hobby at a local gym and immediately fell in love with the sport.

“I’m bad at math,” she said. “I don’t know the formulas, but I get MMA formulas instantly. Martial arts have formulas of their own, like how to block certain attacks and how to react afterwards,” Lee said. “My friends don’t really get me but I do my own thing. I guess I’m weird that way.”

After making her debut at Road FC, a Korean-based MMA promotion, Lee suffered two straight losses. Her first bout against Japan’s Satoko Shinashi on July 25, 2015, was a tragic loss as she came out with a technical knockout (TKO). But despite this, her vicious fighting style captivated MMA fans.

After her second loss in February of this year, Lee decided to buckle down and train harder than ever before. For techniques that she couldn’t pull off, she practiced 100 or 200 times. She also trained with male fighters who were far stronger and more experienced, learning to take their kicks and punches. As a result, she came out with the first victory of her career in March, forcing Japan’s Natsuki Shimomakise into submission with an armbar.

Lee’s ultimate goal is to become the most tactically adept fighter in Asia. “I started this, so I’d like to be the best,” Lee added with a big grin. “I will think about what will happen afterwards later.”