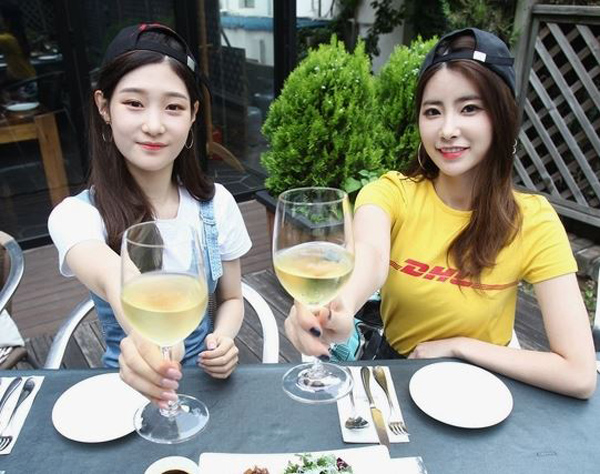 Jung Chae-yeon, left, and Ki Hee-hyun of a seven-member girl group Dia speak out after being criticized for participating in the survival audition show “Produce 101.” [ILGAN SPORTS]

K-pop girl group Dia may sound unfamiliar to many - until the names of members Jung Chae-yeon and Ki Hee-hyun are brought up.

The group this season was I.O.I.

Jung and Ki had previously debuted in 2015 as members of Dia, but said they were temporarily leaving Dia to participate in “Produce 101.”

They were largely unknown until the program, but quickly became fan favorites. Jung was particularly beloved, and was eventually chosen as one of the 11 finalists to join I.O.I for its 10-month run.

But those feelings turned sour when Dia released a new album on June 14 - featuring both women as active members.

Fans of the show accused Jung and Ki of using the program to promote their old group.

Jung says she is an active member in both groups, but that she has been particularly targeted by malicious online comments about her decision.

Jung and Ki sat down for an interview with Ilgan Sports, an affiliate of the Korea JoongAng Daily, to discuss the incident and their newfound fame.

Q. It hasn’t even been a year since you two debuted, but it seems like you’ve both experienced a lot.

Ki: I was able to experience a lot within a short amount of time. I was actually scared at first because none of this was expected. We got to take part in “Produce 101” because we lacked confidence. Although I felt extremely pressured, I can firmly say that I was able to improve my [musical abilities]. Although I was not selected to become an I.O.I member, I got a lot from the show, including new friends.

Jung: I did my best during the program in order to survive. I then found myself as one of the members of I.O.I. As a member of the new unit, I was very busy for a month. Although having tight schedule is exhausting, I feel very good completing all the work. I am also glad to have made many friends who have the same interests as me.

Jung: I have been trained to become a singer for around seven months. My first dream was not to be a singer. However, I got interested once I learned it was a possibility. My introduction to my talent agency was a total coincidence.

You caused controversy over “temporarily leaving” Dia to participate in “Produce 101.”

Ki: Leaving is a very sensitive word. But actually, the company was very considerate of us. It was our choice to take part in the program. In fact, we should be the ones to be sorry to the company, not the other way around.

But how come only two members of Dia participated in the show?

Ki: We talked about it with other members, but we wanted to enter the show more. I guess each member did the best in their own way.

Did being a member of Dia help you both promote yourself in “Produce 101?”

Ki: Dia did not have that many fans. To be honest, I did not expect that having already debuted with Dia would give me an advantage. I just believed that [the public] would like me if I worked hard. I have never thought that I have benefitted from debuting with Dia.

Jung: I never thought this many people would talk negatively about me. Many criticized me, saying that I got popular through I.O.I and then used that popularity to promote Dia. I believe people were harsher on Dia because Dia was the first group to have benefitted from the success of I.O.I. I have tried not to care about comments on the internet, but I was so curious that I read all of them.

How is the relationship among the members of Dia?

Ki: It’s really good. I think all of our members are really cool. They are so nice.

Do you have any future goals?

Ki: Regrouping as Dia for the second time wasn’t easy, but I really hope we succeed as a team. Although I wish every member is able to get the career she wants, I hope we become famous as Dia because being a team is so important. Since I am interested in writing songs and rapping, I want Dia to become a female act that makes unique, distinctive music.

Jung: I hope Dia becomes an unforgettable group. I want Dia to be remembered by the public even when we are really old.