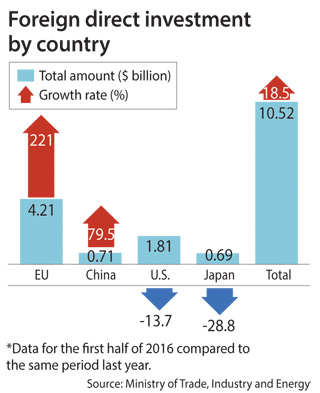 Foreign direct investment flows to Korea in the first half of this year totaled $10.52 billion, the highest ever for the first half of any year. The statistics are based on investment registrations of an investment project rather than actual cash movements. The new investment money surpassed the previous high mark in 2014, the only other time inflows in the first six months of a year exceeded $10 billion. The total was bolstered by inflows from China and Europe, according to the Ministry of Trade, Industry and Energy on Monday.

By region, investments coming from China and the Europe Union rose significantly, while those from the United States and Japan fell compared to the previous year. The EU Invested $42.1 billion, up 221 percent from last year, and China invested $0.71 billion, 80 percent more than in the first half of 2015.

Investment commitments from the United States dropped 14 percent, to $1.81 billion, and those from Japan fell 29 percent to $680 million during the same period.

“Investments in Korea increased even though the global economy is slow and it appears that foreign investors thought highly of Korea’s newly growing industries such as bio health and IT,” said Kim Jae-joon, a director at the Trade Ministry.

Among the total investment in manufacturing, 75 percent was in electronics and transportation, which suggests that foreigners continue to be interested in Korea’s key industries.

Eighty percent of the total investment in the service sector, $5.73 billion, was in the financial, real-estate and IT sectors.

According to the Trade Ministry, investments registered with the government in the first half of this year grew 18.5 percent in value year to year. But registration and actual inflow of the funds can come during different reporting periods. Actual financial arrivals fell in the first half by 23.2 percent to $4.84 billion.

“Saudi Aramco’s $1.84 billion investment in S-Oil arrived in the first quarter of last year, and that huge amount was the reason this year’s actual arrival number looks less impressive,” said an official at the Trade Ministry.

The ministry also warned that the outlook for the second half might not be as rosy.

“The United Nations Conference on Trade and Development has predicted the global FDI will drop by 10 to 15 percent this year from the $1.76 trillion last year, said Kim at the Trade Ministry. “The government will come up with plans such as hosting seminars and conferences for foreigners, both here and abroad, to attract more investments in the second half.”

The government said it will try to meet with foreign corporations already operating in Korea as often as possible to convince them to invest more here. In the first half, brand new investments accounted for only 43 percent of the investment flows.