No exodus of money from Asia after ‘Brexit’

No exodus of money from Asia after ‘Brexit’ 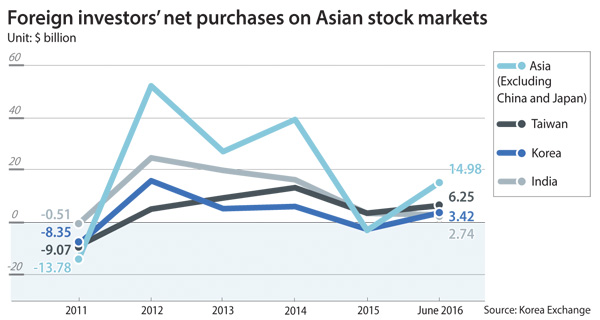 Foreign investors net purchased $3.42 billion worth of Korean stocks in the first half of this year, making Seoul the second-largest investment destination in Asia, excluding China and Japan.

Despite fears that Britain’s vote to leave the European Union could spark an exodus of investments in emerging markets including Korea, the U.K. vote barely had an impact on Asian markets.

Among the Asian markets, Thailand’s market index saw the biggest increase. In the first half Thailand’s SET index rose 12.19 percent followed by the Philippines’ PCOMP, which rose 12.14 percent and Indonesia’s JCI index, which went up 9.22 percent. The Kospi only inched up 0.46 percent. During the same time period, the Japanese stock index saw the sharpest drop as it tumbled 18.17 percent. China’s market reported the second-largest drop at 17.22 percent.

The impact of the so-called Brexit has been limited so far. Although the Asian markets tumbled on June 24 when Britain voted in favor of leaving the European Union, the markets have recovered since June 27. While foreign investors sold off $504 million worth of stocks in Asian markets on June 24 -- including $54 million in Seoul and $412 million in Taipei - foreign investors started increasing their purchases in the later days of last month. By June 30, foreigners net purchased $579 million worth of stocks in Asia.

There was no massive exodus of foreign investors in the Asian markets.

A report by the Korea Center for International Finance released Monday showed that foreign investment bank are proposing increased investment on the Korean stock market, citing its safety and an improvement in Korean companies’ performances.

The foreign investment banks including Credit Suisse, Nomura, UBS and JP Morgan are speculating that the Kospi will move between 1,950 and 2,100 in the second half with downward risk limited.

The positive factors contributing to the rise in the Kospi are a depreciation of the Korean won against the U.S. greenback, which will further improve Korea’s export competitiveness, as well as a growing likelihood of another interest rate cut by the Bank of Korea.

In fact Nomura has projected that the Korean central bank will lower the interest rates as much as 0.5 percentage points in the second half.