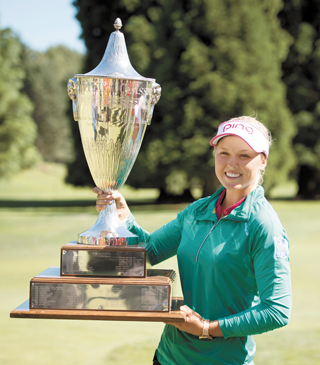 PORTLAND, Ore. - The Cambia Portland Classic has had a little bit of just about everything as the LPGA’s longest-running non-major, but in its 45-year history hasn’t seen a teenage winner quite like Brooke Henderson.

The 18-year-old Canadian became Portland’s first back-to-back champion in 13 years when Henderson shot a final round 1-under 71 to win by four strokes over American Stacy Lewis at Columbia Edgewater Country Club.

The second-ranked Henderson posted a 14-under 274 for 72 holes, though it was a far different grind than her performance in 2015, when she won the Portland Classic by a record-setting eight strokes. Henderson’s final two rounds became a collection of par saves after hitting many wayward drives and approach shots.

“I didn’t really play my best today, but I hit good shots when I needed to, and I got some good breaks,” Henderson said. “A weird day of golf. I hit some really good shots and some really bad shots.”

Henderson is the tour’s second wire-to-wire winner this year, joining Jang Ha-na, who won the Coates Championship in February.

It was Henderson’s third career win, all coming in the Northwest. Aside from her two Portland victories, Henderson won the Women’s PGA Championship at Sahalee in Sammamish, Washington, three weeks ago.

The three wins came in different fashion. Last year’s Portland win was a runaway, and at Sahalee, Henderson caught fire during the final round to rally past top-ranked Lydia Ko.

Henderson heads to this week’s U.S. Women’s Open at CordeValle in San Martin, California, having won two of her past four tournaments, including a major. “Coming off a win here is really going to give me a lot of confidence,” Henderson said.

Lewis was 10-under after a final round 69, though she never genuinely threatened. Lewis is winless in 53 starts since taking the North Texas LPGA Shootout in June 2014 for her 11th tour victory. She has 11 runner-up finishes during the drought and 24 overall.

Norway’s Suzann Pettersen, the 2011 and 2013 Portland champion finished third at 9-under after a 72.

“The whole week I didn’t hit the ball great, and it I just couldn’t do it the last couple holes,” said Uribe, winless in six years on the LPGA Tour.

Monday turned into a two-player race early on the back nine, when Uribe birdied the par-4, 337-yard 11th to tie Henderson at 14-under.

But Henderson quickly resumed control at the par-5, 546-yard 12th. Uribe hit a poor drive and made bogey, while Henderson dropped a three-foot birdie putt to take a two-shot lead.

The lead melted to one at 13, when Henderson’s tee shot at the 160-yard par-3 went into the bunker and she made bogey. Uribe fell two strokes back at the par-4, 372-yard 15th with a bogey.

The par-4, 397-yard 17th became the tournament’s decisive hole. Henderson and Uribe both drove into a bunker, then blasted their approach shots over the green. But Uribe hit her third shot 50 feet past the hole and made double bogey, while Henderson was able to get up and down to save par, making an eight-foot putt.

Henderson said it was advantage to have Uribe hit her chip shot first, as both players were over the green and facing testing downhill shots.

“I was lucky. She was in the same situation ... I realized how fast it was and how delicate of a shot it needed to be,” Henderson said.

Lewis never got closer than three strokes, and might have put some pressure on Henderson but made bogeys at 16 and 18.