Why no solutions for fishermen?

Why no solutions for fishermen? 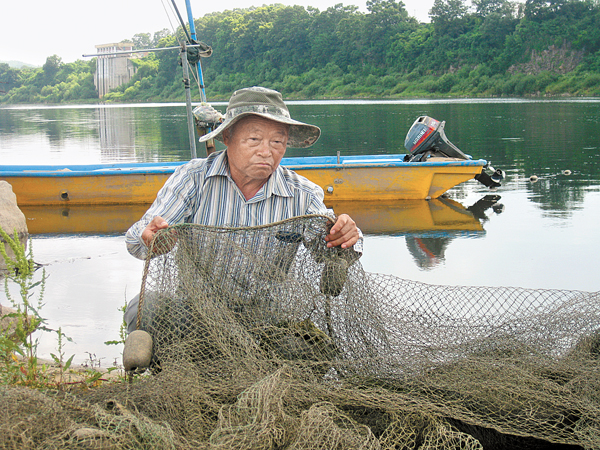 The agony of local fishermen deepens as there’s no plan to help them after the Hwanggang Dam in North Korea was opened without notice in mid-May.

After the torrential rain on July 1, the region around the Imjin River was quiet on July 3. Few fisherman were seen on their boats or drawing nets over the river. Most had given up fishing in fear the North would unexpectedly open the dam again because its reservoir had nearly reached capacity.

There were few vacationers visiting the river. Downstream near the Gunnam Dam in Yeoncheon-gun, signs were posted warning people not to go swimming because of how suddenly the water level could change.

Fishermen on the Imjin River haven’t been able to work since mid May.

On May 16 and 17, the Hwanggang Dam discharged 400 tons of water per second without any notice, resulting in losses of fishing equipment worth hundreds of millions won.

May is a river puffer season, and it makes up half of the year’s haul. It was also breeding time, so the sudden flooding of the Imjin River will likely affect next year’s catch.

In preparation for an additional flood from the Hwanggang Dam, fishermen have taken away their nets and pulled out their fishing boats.

“Gunnam Dam was built to respond to a sudden discharge from Hwanggang Dam, and if it had served its role, damage could have been minimized,” said Jang Seok-jin, who organizes fishing operations for the Paju region.

“The water damage is a man-made disaster, not natural. Compensation for the damaged fishing equipment has not been made for over a month now, and compensation for the losses from not being able to operate is not even in discussion.”

A civic group in Yeoncheon area has also condemned the government’s weak response.

Lee Seok-woo, president of Yeoncheon Alliance for Community Partnership, said that the government is partially responsible for the aggravation of inter-Korean relations that led to the North discharging the dam. He called for fundamental solutions so that the residents of the Imjin River area aren’t the only ones paying the price.

President Park Geun-hye often says that people should be able to live comfortably and run their businesses without worry. That’s exactly what locals here are desperately wishing for. The government needs to listen to the reasonable appeals of the people in the Imjin River area. Solutions should be devised quickly by revising the Special Law on Support for Border Areas.