Chat with your freezer? SKT makes it possible

Chat with your freezer? SKT makes it possible 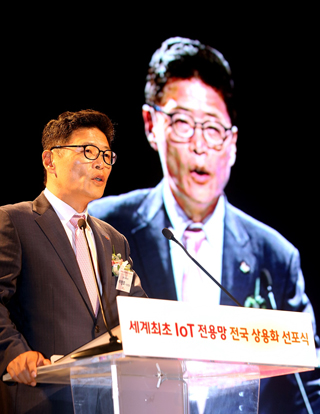 Lee Hyung-hee, president of SK Telecom’s mobile network operations, announces the company’s development of a new network to promote the Internet of Things technology on Monday in Seoul. [SK TELECOM]

SK Telecom announced Monday that it had completed a new network to promote the “Internet of Things,” systems that can control and obtain information from physical objects. The new nework, called LoRa, will allow such IoT services to be available nationwide.

The telecom operator also released details of monthly subscription plans for those services that will start at 350 won (30 cents) per month. Service plans can include, for example, regular checks of public facilities like street lights and tracking of pets.

The installation of the network, which began in Daegu and expanded across the country, took three months to complete. It is now available to 99 percent of both the Korean population and the nation’s land area.

LoRa is based on “low-power, wide-area” technology. The transmission speed is only about 10 kilobytes per second, about that of fax modems in the mid-1990s, but the communications range is up to 10 kilometers. That makes it suitable for connecting to and checking on your refrigerator, air conditioner, or even your pet.

And that speed is still sufficient, SK said, to do things like somehow attach a sensor and transmitter module to a soccer ball to allow athletes to see their kicking pattern on a smartphone.

SK Telecom is handing out 100,000 IoT modules to its corporate partners and individual experimenters to promote the service.

LoRa’s completion comes three months after SK Telecom finished installing the complementary network for IoT: LTE-M, a variant of today’s dominant wireless system, Long-Term Evolution. That technology is designed to allow machines to talk to other machines, and boasts a much faster 10 megabytes per second speed over the existing LTE network.

SK said users could choose to use either or both systems, with the choice depending on the frequency of use, data volume and transmission speed required. It wants to have 4 million physical objects connected to its IoT network by the end of next year.

“We will be able to build a brand-new ecosystem with the launch of an IoT subscription service and open new business opportunities with other business partners,” said Lee Hyung-hee, president and chief operating officer of SK Telecom at the launch ceremony on Monday. “The network will naturally produce massive big data exchanges between machines, which have never existed before, thus propelling the progress of artificial intelligence, cloud networking and other futuristic industries.”

The monthly IoT subscription plans price monitoring and metering of gas lines for households once hourly at 350 won per month. That requires only 100 kilobytes of data per check, but the fee increases when more data must be exchanged.

Tracking a bicycle parked outside a home, for example, requires a check every minute; the fee is 700 won per month. Safety controls at construction sites will cost as much as 2,000 won per month.

SK Telecom has partnered with more than 100 smaller companies to develop services and solutions as an initial step in bringing IoT into daily life.

SK’s enthusiasm about IoT technology is shared elsewhere. According to the market research company Gartner, the global IoT market is expected to grow to as much as $1.2 trillion by 2020. Korea’s market is projected to reach 13.7 trillion won, less than 1 percent of the global figure.