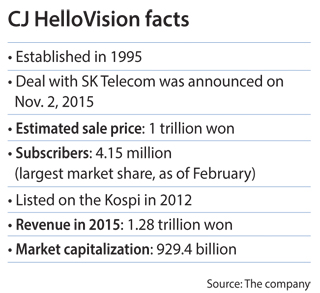 It took seven months for the antitrust watchdog to reach a conclusion on SK Telecom’s plan to acquire a 53.9 percent in CJ HelloVision from its affiliate CJ O Shopping for 1 trillion won ($870 million) and merge it with its wholly-owned subsidiary SK Broadband.

The prolonged period of review followed severe protests from SK’s competitors, KT and LG U+, which claimed the deal would compromise public trust in the media business and hamper fair competition. SK filed an application for the review by the FTC, the first gateway to clinching the deal, on Dec. 1. SK Telecom initially set the date of the deal’s deadline for April 1.

SK Telecom now has roughly two weeks to go through the document from the FTC and submit feedback on it. The FTC will then make a final decision.

But that is not the end. The baton for a final decision will be passed to the Ministry of Science, ICT and Future Planning, which will also discuss it with the Korea Communications Commission and obtain its agreement.

Even though both the FTC and SK Telecom are prohibited from disclosing what’s contained in the paper, information leaked by various insiders say the conditions are meant to minimize the repercussions of the mega-deal.

Widely assumed conditions include banning SK Broadband from raising the fees for paid subscription services for a designated period and requiring the merged entity to sell off its division devoted to selling budget phones on cheaper subscription fees. CJ HelloVision is No. 1 in the budget mobile business and SK Telecom’s subsidiary SK Telink is No. 2.

Some say the FTC advised SK Broadband to sell local cable TV subsidiaries of CJ HelloVision stations in areas where the combined market share in terms of subscribers of CJ HelloVision’s cable TV service and SK Telecom’s IPTV exceeds a certain limit, 60 percent for instance - a measure to prevent an SK monopoly. CJ operates in 23 regions and 15 have more than 60 percent share.

Under this scenario, SK Telecom may no longer pursue the acquisition since it will have to give up three fourths of the subscribers of CJ.

SK Telecom, KT and LG U+ all operate IPTV services, similar to cable TV, using their Internet networks, and SK Telecom’s merger with the nation’s largest cable TV network will create a giant with 7.18 million subscribers. That will narrow the gap with KT’s 8.17 million subscribers.

“Should the M&A between SK Telecom and CJ HelloVision come true, there will be a massive upheaval in the industry,” said a telecom insider. “Perspective on the direction of the change - negative or positive - is widely divided.”