Led by veteran Kim, ‘Familyhood’ climbs to No. 1

Led by veteran Kim, ‘Familyhood’ climbs to No. 1 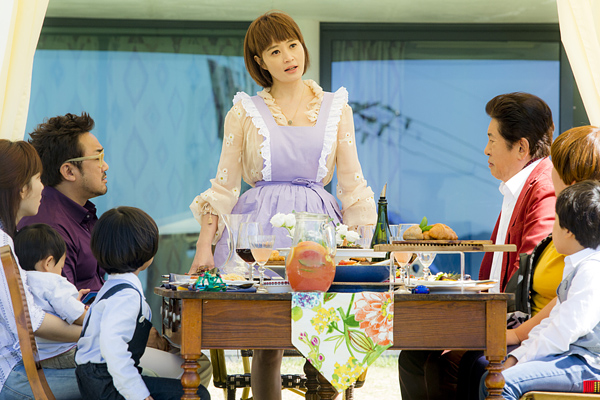 The comedy-drama “Familyhood” shows the struggles of Go Ju-yeon (center), played by veteran actress Kim Hye-soo, who wants to become a mother. [HODU & U ENTERTAINMENT]

Kim Hye-soo, who marked the 30th anniversary of her debut this year, now has something else to celebrate.

The veteran actress saw her latest comedy-drama “Familyhood” take the No.1 spot at the local box office over the weekend.

“Familyhood” was shown across 839 screens nationwide, selling 652,645 tickets between Friday and Sunday, according to the Korean Film Council on Monday.

“Familyhood” opened second on June 29, but caught up with Korean thriller “The Hunt” within two days of its release. 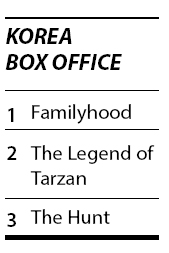 The film is likely to hit one million tickets sold soon, far faster than other Korean comedy-dramas like “Speed Scandal” (2008) and “Sunny” (2011), each of which went on to each sell 8 million tickets.

The film centers on the demanding actress Go Ju-yeon (played by Kim), who wishes to become a mother and bonds with a pregnant middle school girl. Fans have said the film is similar in many ways to “Speed Scandal.”

Hollywood blockbuster “The Legend of Tarzan” debuted second in its opening week with 405,829 tickets sold.

“The Hunt” fell to third.

The thriller, which features top-notch actors like Ahn Sung-ki and Cho Jin-woong, is set on a remote, haunted mountain. It follows two groups, one trying to scale the mountain in search of gold and another trying desperately to escape after a tragic accident.

It’s hoping to become the second Korean thriller this year to succeed after “The Wailing,” which recently sold more than 8 million tickets. Other films rounding out the top 10 by tickets sold include “The Jungle Book,” “Conjuring 2,” “Me Before You” and “500 Days of Summer,” which has been re-released in Korea for the first time since its debut in 2009.