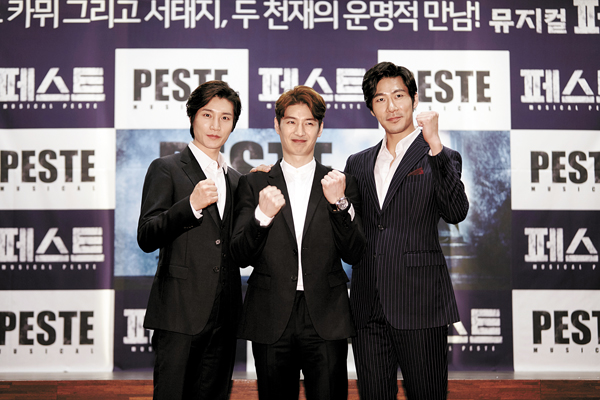 The musical is based on “The Plague,” the novel by Albert Camus (1913-1960) that takes place during an outbreak of bubonic plague. It explores how people react to dire situations, asking questions about the nature of the human condition.

If that sounds too heavy, don’t worry - this latest adaptation is set to the music of legendary K-pop icon Seo Taiji.

The singer-songwriter rose to huge popularity in the 1990s and early 2000s.

“Peste” is produced by Noh Woo-sung, who also wrote the book. It is directed by Song Gyeong-ok, who has previously helmed large-scale musicals like “Empress Myeongseong” and “Hero,” among others.

Work on the project began six years ago, but Song said they struggled to come up with a story that could match Seo’s music.

“We came up with several scripts for the musical that recreated other original stories but none were satisfactory,” she said at a press conference on July 1.

According to Noh, he “tried to focus on delivering the message of these two great artists, both of whom stressed that people should resist the irrationalities of our society.

“I thought that more and more people are losing their voices,” Noh added. “I wanted to shed light on the significance of resistance in the musical, which is what both artists wanted to highlight.”

“Peste” takes place in a utopian, high-tech metropolis that finds its perfection disrupted by the emergence of a plague.

According to the director, the musical is based on Camus’s novel but features “stronger characters” and a “more dramatic setting.”

His music is known for borrowing from hip-hop, metal, soul, ballads and even classical music, so it’s curious how it will cohere into a score.

That will be the job of music director Kim Seong-soo, known for his work on musicals like “Jesus Christ Superstar.”

Seo was not directly involved in the production of the musical but supervised the adaptation of his songs.