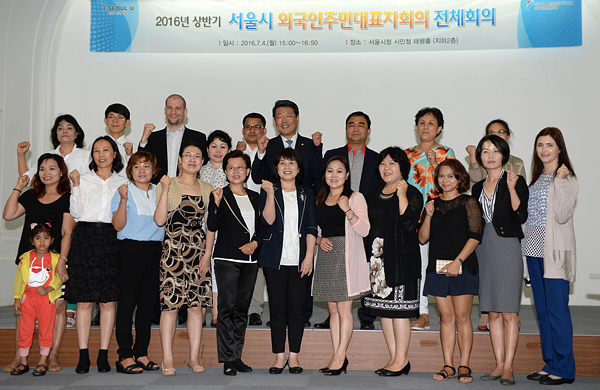 A 38-person representative group of foreign residents in Seoul pose at the Seoul City Hall on Monday before presenting their policy recommendations to the Seoul Metropolitan Government. [NEWSIS]

A group of foreign Seoul residents gathered at city hall on Monday to propose policies to the Seoul Metropolitan Government, the first meeting of its nature in the city’s history.

A total of 38 foreign residents from 23 countries were selected last December to represent some 450,000 foreigners living in Seoul. The 38 representatives have all lived in Korea for more than a year, and within Seoul for more than six months. Many of them also speak and write Korean fluently.

The group presented 16 policy suggestions that they prepared over the past six months.

“It’s so uncomfortable for foreigners here,” said Oh Mie from Russia, speaking in fluent Korean. “When you register for health insurance, they only take your name in Korean, and if your name is too long, they just cut your name short wherever they want.”

She added, “So when we go to hospitals, the nurses call these arbitrarily shortened names, and you don’t know if they’re really calling you. It would help if our alien registration cards included Korean names.”

“It may sound basic,” said Tu Yenwen, a 29-year-old Taiwanese who has lived in Korea for six years, “but foreigners here are not taught how to put out the trash.”

Tu explained that the instructions written on the trash bags are in “difficult, traditional” Korean words, and that changing them to simpler terms or including English would help many foreign residents do their part to properly dispose of trash in Korea.

“I am astounded by the amount of research each of you has done on the issue,” Eum said. “The city government will review and implement your suggestions, and I will be speaking with Justice Ministry and Health and Welfare Ministry to deliver all your recommendations.” As the first such group of foreigners to deliver policy suggestions to the city government, the representatives impressed the audience with their immersion in local culture. Indeed, they seemed to live and breathe Korea. When a technical error took place during her presentation, Mainbayar instinctively blurted out, “Oops!” in Korean.