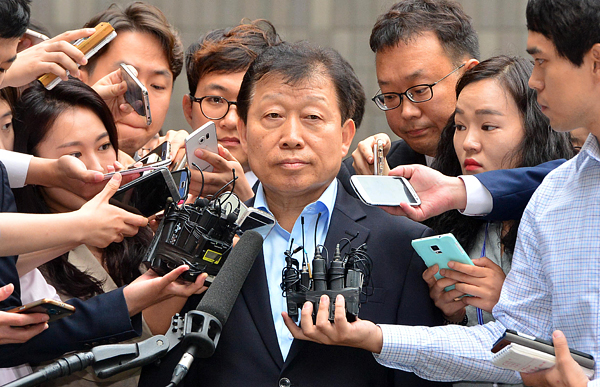 The Seoul Central District prosecutor’s office summoned yet another former chief executive of Daewoo Shipbuilding & Marine Engineering (DSME) on Monday for his alleged involvement in the company’s large-scale accounting fraud.

“I feel deeply responsible for the serious situation that the company is facing now,” said Ko Jae-ho, 61, who headed DSME from 2012 to 2015, as he appeared before the Seoul prosecutor’s office at 9:30 a.m. on Monday for questioning. But Ko denied any allegations of his involvement in the company’s accounting fraud.

This is the second time a former chief executive of the company has been summoned by the prosecution, following the arrest of Nam Sang-tae on June 29, who helmed the company from 2006 to 2012.

The prosecution suspects that from 2012 to 2014, while Ko was the head, the company illegally profited 5.4 trillion won ($4.7 billion). Ko is also accused of having granted 200 billion won in bonuses to company executives from 2013 to 2014, despite the company’s financial difficulty.

The prosecutors found that while Ko headed DSME, the company put random numbers in its accounting book instead of actual performance figures in order to meet profit goals.

After exaggerating its operating profits in this way, DSME sold off its corporate bonds and bills, inflicting about 40 trillion won worth of damage to the nation’s financial market.

After inspecting Ko, the prosecution plans to request an arrest warrant for him on charges of fraud and breach of duty to the court.

On June 25, the prosecutor arrested DSME’s former chief financial executive, a man surnamed Kim, who served the company under Ko and who was alleged to have been practically directing the company’s accounting fraud. Kim claims he was told to do so by Ko.

Prosecutors will expand their investigation to officials of the Korea Development Bank, the main creditor and the largest shareholder in DSME, which failed to properly monitor and manage the shipbuilder.

As the investigation proceeds, some expect the prosecution may even conduct inspections into government officials.