Ryu is fit and ready to start throwing heat again

Ryu is fit and ready to start throwing heat again 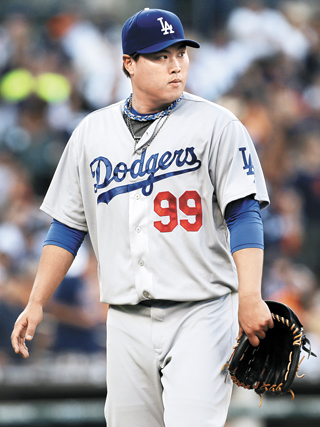 Ryu Hyun-jin of the Los Angeles Dodgers is finally returning to the big league this Friday after a shoulder injury. The game against the San Diego Padres will be his first majors game since October 2014. Ryu’s return is likely to bolster the Dodgers pitching rotation with Clayton Kershaw on the DL due to back pain. [AP/NEWSIS]

The date is set for the Los Angeles Dodgers pitcher Ryu Hyun-jin to pitch his first game this season after a nearly two-year layoff. The southpaw will start July 8, Friday (Korean time), against the San Diego Padres at home, according to the Dodgers manager Dave Roberts.

The Korean left-hander went through a surgical procedure on his left shoulder in May 2015. The operation was intended to repair a torn labrum, the piece of fibrocartilage affixed to the shoulder socket that keeps the ball of the arm bone in place. According to his doctors, it is a delicate part of the shoulder that pitchers tend to injure more than any other. In addition, they said it is difficult to treat the injury for a full recovery, not to mention the tedious and mentally draining rehab process.

Ryu’s rehabilitation process was no different. He first started a light throwing practice session four months after his injury, and his shoulder was no by means prepared for anything tougher than that. His first bullpen session was not until January of this year, which was ended in less than a month due to shoulder pain. It was not until May that Ryu was able to throw live in a Single-A minors game. However, although he made several appearances in the minors in May, the soreness in his shoulder persisted, forcing him to start from scratch in June. It has indeed been a long journey for Ryu and the Dodgers coaching staff have been nothing but supportive.

“I think I’m pretty much ready to go,” said Ryu on Tuesday, according to the Los Angeles Times. “I’m sure that will be a big influence, as far as the adrenaline goes,” He added, “But I’ll have to find out when I’m actually out there on the mound pitching.”

Ryu’s return was not completely without skepticism. What worried the Dodgers management the most was his fastball velocity. Since he began his rehab session, his fastball speed had lingered around the upper 80s. This number was alarming considering Ryu used to toss four-seam fastballs as fast as 95 miles per hour before his injury. But now that reached 96 miles per hour in his last rehab session on Saturday, Ryu feels he is finally ready to go.

“So far what I have accomplished as far as rehab goals, I think I’m pretty much ready to go,” said Ryu.

Ryu’s impending return seems very timely for the Dodgers, especially with their ace pitcher Clayton Kershaw gone at the moment. Kershaw, who is currently considered one of the best pitchers in the big league, suffered a herniated disk in his lower back on July 1. He has been on the Dodgers’ disabled list since then and the coaching staff has yet to figure out when he will be able to return to the starting rotation. With Kershaw gone, Ryu’s return is expected to bolster the Dodgers’ rotation.