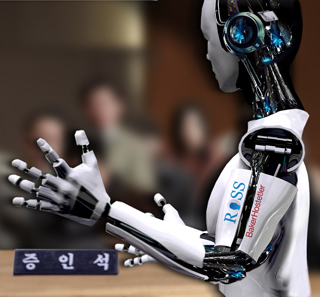 An imaginary artificial intelligence lawyer employed by BakerHostetler, a major U.S. law firm, represents a client on the court.

After the first industrial revolution that started in England, machines replaced workers, and the job security of textile laborers was in jeopardy. In 1811, the so-called Luddites destroyed industrial equipment. Meanwhile, the capitalists who owned the machines accumulated wealth and emerged as a new elite class. What would have happened if the workers demanded the environment to own capital instead of destroying the machines?

Currently, the fourth industrial revolution, led by artificial intelligence, robotics and life science, is in progress. If an automated production system replaced simple laborers, the technology integrating artificial intelligence would threaten professional jobs such as tax attorneys, accountants and business analysts. Studies show that half of the jobs would disappear because of AI and robots. Aside from the workers with creative ideas and advanced professional knowledge, job uncertainty is serious. We are limited to predict and respond to what jobs will survive in the future. No one can know for sure what jobs will disappear and what new professions will emerge 10, 20 years from now.

How should we respond as the value of our human capital is threatened and volatility is heightened? Companies employ strategies to internalize certain business sectors in order to respond to the threats to its market. For example, as mobile purchases became a rival to shopping channels on television, the home-shopping channels would start mobile business as well. If robots threaten workers, those workers can own robots by buying shares of the company that make robots. Workers who deal with automobile engines may own shares of electric vehicle makers. Furthermore, they can own global innovative capital leading the fourth industrial revolution.

When waged workers own promising innovative capital, they can be somewhat protected from rapid social changes. When technological innovation progresses suddenly, their wages may get lower and job security could be hurt, but the productivity of the capital they own would be enhanced. So their labor income would decrease but they can make up the loss from an increase in capital return. If the environment becomes less innovative than expected, the capital income would not be as high but they can maintain conventional jobs and enjoy stable cash flow.

Retirement funds and personal pensions can help execute a strategy. Pensions are probably the only long-term financial assets that individuals can accumulate and that are appropriate for investment. In the case of the retirement pension in Korea, investing in other countries is an option, but 90 percent of the fund is invested on the products that guarantee the principal. Personal pensions are not much different. The conventional asset structure will not allow waged workers to enjoy the fruits of innovation from the fourth industrial revolution or protect them from the uncertainty.

It is worthwhile to study the strategy of Norway’s Government Pension Fund Global. The fund was established in 1990 to respond to long-term changes such as aging of the population and a drop in oil prices. The fund manages the income from selling petroleum and invests $850 billion currently. Sixty percent of the fund is invested in stocks, and the country of 5 million people owns 1.3 percent of listed stocks by investing in more than 9,000 companies in 75 countries. GPFG is a defense against the variable of the future generation’s wealth fluctuating according to the oil price.

Individuals accumulate their own funds through a pension. As Koreans, especially the young, accumulate pensions for 20, 30 years and are at the center of the fourth industrial revolution, we need to look at funds with long-term strategic vision like GPFG. We should evolve from the passive concept that pensions are savings accounts.

By owning shares of innovative global companies using personal pensions, we should prepare for the increased life expectancy and the future of the fourth industrial revolution. Let’s become global capitalists with strategic views.


*The author is the director of the Mirae Asset Retirement Institute.