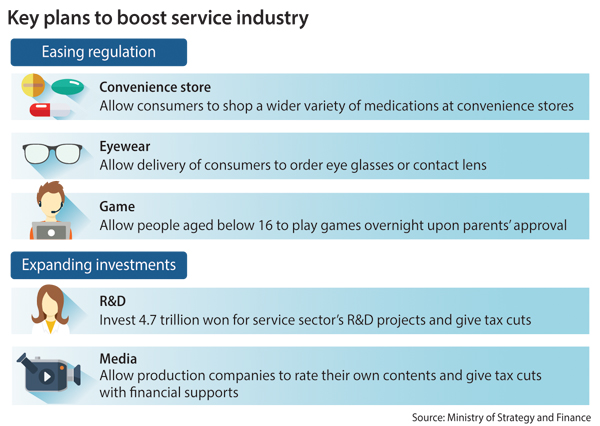 One recent Sunday morning, a 40-year-old resident of southeastern Seoul was anxiously waiting for a drug store to open, as there are only a few opened on the weekend and he badly needed medicine for his 4-year old daughter. Then he noticed an open convenience store nearby, where he was able to find the right medicine.

This kind of story might become a lot more common, as consumers will soon be able to find a much wider variety of medicine at convenience stores, and will also be able to have eyeglasses and contact lenses delivered to their homes instead of having to physically visit in stores for them.

These are a few of the regulations that the government announced on Tuesday in the hopes of further expanding the local service industry.

According to the Ministry of Strategy and Finance, the government will reduce the service industry’s financial burdens by providing tax cuts and by expanding the amount of investments in research and development (R&D) projects.

Government branches will also cooperate with each other to ease regulatory burdens, or a total of 46 regulations that are seen as holding back the service sector.

In particular, the Ministry of Strategy and Finance said it will try to expand the number of medicines being sold in convenience stores and allow contact lens and glasses manufacturers to ship their goods directly to customers.

Currently, there are only 13 kinds of basic medications, such as those that treat fever and headaches, available at convenience stores, and eyewear companies are allowed to sell their products only in certified stores.

“We have been doing research for three years and the final result will come out in December,” Kim Kang-lip, a deputy director at Ministry of Health and Welfare, said. “Then we will be able to decide how to expand the kinds of medicine available at convenience stores.”

The government also said it will ease some of the regulations in healthcare sectors, such as the one that bans doctors from treating patients directly through tele-healthcare technology. As of now, doctors are only allowed to use the technology to give directions to other doctors or health care providers to treat their patients.

The Trade Ministry said these plans will allow them to attract 1 million foreign patients to Korea, which is three times more than the current figure.

“We will try to expand government spending on the service sector from the current 39 trillion won (33.8 billion) to 54 trillion won by 2020,” said the Finance Ministry in a press release on Tuesday.

New start-ups operating in special districts for R&D designated by the government will also enjoy tax cuts. Currently, they get 70 percent off the total amount they invest and the Finance Ministry said it will consider giving them 100 percent off if they are successful in creating a certain number of quality jobs.

The government also came up with some ideas to improve the market of Korean contents, hoping the market size to grow from 100 trillion won to 135 trillion won.

Currently, the Korean government bans people below the age of 16 from playing online games from midnight to 6 a.m. The Finance Ministry said it will consider easing the regulation, or allowing students to play games, if their parents allow them to do so.

Furthermore, the government will come up with 50 billion won in funding to support small and midsized production companies to produce various contents, including movies and dramas, and to export them to China. The Finance Ministry said it will also give tax cuts of up to 10 percent for companies making media contents such as movies.

The Trade Ministry said that it will try to increase the amount tourists spend in the country from 25 trillion won to 40 trillion won through various plans aimed at taking advantage of hallyu, or the Korean wave, and by diversifying tourist attractions so that people can enjoy various aspects of Korean culture and shopping at the same time.

The government’s goal is to attract 160,000 foreign students, up from the current figure of 90,000. It also expects sales of the Korean E-Learning market to grow from 3.4 trillion won to 5 trillion won.

Furthermore, some regulations on the finance industry will be eased. The Finance Ministry will consider ways to allow robo-advisers, an online wealth management service, to give direct advice to banks’ customers rather than requiring that it go through bank employees.

The government also plans to allow fintech companies to transfer money directly to bank accounts overseas. The Trade Ministry added that fintech sales are expected to grow from 2.7 trillion won to 3.7 trillion won.