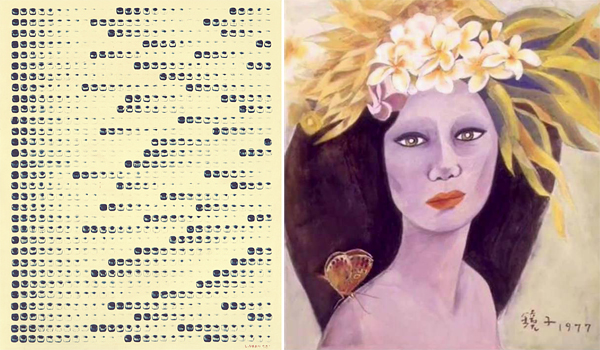 Left: This painting by Lee Ufan, “From Point No. 780217,” is one of his 13 pieces suspected of being forgeries. Lee has deemed all 13 pieces authentic. Right: “Beautiful Woman” of Chun Kyung-ja (1924-2015) has also been accused of being forged. [JOONGANG ILBO]

The Korean art market is in bad shape after a series of controversies involving alleged forgeries.

Most recently, the renowned modern artist Lee Ufan was summoned to the Seoul Metropolitan Police Agency to look at 13 pieces deemed fakes by both the National Forensics Service and civilian art experts.

He traveled to Seoul from Paris, conducting lengthy examinations on June 27 and 29.

But in a surprising turn of events, Lee was adamant that all the pieces were authentic.

“The 13 suspected forgeries are all authentic because they are painted with my unique techniques, considering the use of breath, rhythm and color in them,” Lee said in a press conference on June 30. “These factors are similar to fingerprints and cannot be forged.”

Lee went even further, alleging that the police had tried to coerce him into lying.

“Police asked me to acknowledge that four pieces [an art dealer] admitted to having forged were indeed fakes but the others were real in an attempt to reach a compromise, but I refused,” Lee added.

The police strongly denied the incident.

Lee is not the only artist currently embroiled in a forgery scandal.

On June 26, five pieces by Chun Kyung-ja (1924-2015) that were displayed in the Seoul Museum of Art were confiscated by prosecutors, who wanted to use them to determine the authenticity of Chun’s allegedly forged “Beautiful Woman.”

The museum had been displaying the pieces to commemorate the first anniversary of her death.

Chun’s “Travel Sketches” are now also suspected of being counterfeit. As a result, Seoul Auction decided not to put them up for sale on June 29 as scheduled.

Despite the chaos around the works of Lee and Chun, other Korean artists appear to be doing better than ever.

It was the fourth time in nine months that pieces by Kim had set new auction-price records.

The four pieces are all dot paintings done during his New York period. All are large-scale oil-on-cotton paintings that use tens of thousands of round dots surrounded by layers of square borders.

It was also notable that the new record was set in Seoul rather than Hong Kong, where Kim had formerly broken his sales records.

But rather than being an indication of the health of the Korean art market, experts say Kim’s record-setting sales are a reaction to the forgery scandals.

“Over the past few years, Kim Whanki and Lee Ufan have been called the duumvirate of the Korean art market,” said So Jin-su, a professor of economics at Kangnam University.

“But as Lee’s works are at the center of the controversy lately, collectors are focusing largely on Kim’s works, considering them comparatively safe.

“Moreover, Kim’s paintings are considered well-kept compared to those of other Korean artists,” he added.

It seems, then, that there are two issues raised by the forgery scandals.

First, can artists be trusted to accurately appraise their own work?

Second, what can Korea do to reduce the number of forgery controversies in the future?

Even though legal authorities ultimately have the power to decide whether or not a piece of art is authentic, this can clearly create problems when the artist is still alive and able to contradict that decision.

Lee Ufan has expressed his annoyance that police asked for the opinions of alleged art experts and the National Forensic Service before asking him to look at the pieces.

“It is common sense to prioritize the opinion of the artist if he or she is alive, and it is the same in other nations as well,” Lee said. “However, the police ignored this.”

But according to Kim Hyung-jin, a lawyer specializing in art-related laws, there have been several cases abroad in which the artists themselves made errors in determining the authenticity of their own work.

“The opinion of an artist can be an important factor in an appraisal, but it is not the decisive one,” Kim said.

He cited the case of Karel Appel, a Dutch painter who authenticated forgeries of his work ahead of an auction and was subsequently humiliated.

Experts agree that the most objective way to authenticate a work of art is to verify its history and provenance rather than relying on the artist’s opinion or the insight of experts.

In a telephone interview, Koo Bon-jin, a lawyer whose expertise is in art law, emphasized that a work’s provenance should be the decisive factor in distinguishing its authenticity.

“Also, there are artists who change their style of paintings constantly. In such a case, if the changed style is unfamiliar to the official charged with the appraisal then the piece is easily judged as a forgery,” Koo added.

“But if the owner who possessed the work from the beginning and the artist him or herself is credible, then the record of the ownership can be utilized as the most objective and reliable factor when judging authenticity.”

But this is complicated by the fact that unlike in other countries, artists often work without exclusive representation from an art gallery.

This allows artists’ work to float freely throughout multiple galleries, making it easy for forgeries to be slipped in.

This problem was cited by the owner of a gallery who requested anonymity.

“One gallery from the United States came to visit the studio of a Korean artist and decided to buy a piece of art,” the owner said. “But due to the policy of the gallery, which could not buy work from an artist without representation, the artist came to our gallery for help.

“Even foreign artists whose works are showcased in a gallery here in Korea do so through their gallery. But here, such a system is not formalized,” the owner added.

Due to the recurring controversies over counterfeit artwork, many critics say Korea should adopt the Droit de Suite, or Artist’s Resale Right.

The rule gives artists a percentage of the value of their work every time it is resold, and it also creates a clear paper trail to help establish ownership.

The rule has its origins in France in the mid-19th century, when people began to notice how the works of artists that died in extreme poverty were often sold for wildly expensive prices - benefitting only the owners of the paintings.

The rule is apparent in a painting by Jean Louis Forain (1852-1931), in which two children wearing rags point to a painting being auctioned for 100,000 francs and shout, “That’s my father’s work!”

In 2006, 15 member states of the European Union also adopted it.

In those countries, 0.25 percent to 4 percent of a piece’s resale price is allotted to the artist, his or her family or the foundation that holds the copyright of the piece.

The Artist’s Resale Right is maintained until copyrights expire, which is typically 70 years after an artist’s death.

About 60 nations worldwide have enacted the right, though in the United States, California is the only state to have done so.

“I think in the near future, Korea will also legalize the Artist’s Resale Right, as it is becoming the worldwide trend,” Koo said.

The basic goal of the enactment of the Right is to support an artist’s family after his or her death and control speculation on works of art by discouraging rapid increases in prices.

In places like Korea, however, it can also serve as a vital way of more clearly establishing ownership of works of art, thereby lessening the number of potential forgeries.

But according to lawyer Kim, it is not the lack of a record-keeping system that is the issue.

The problem, Kim says, is the way people do not register works of art to avoid taxes.

“The problem is not with the system but with people’s consciences,” Kim said. “There is already a well-structured system - the transfer tax system for works of art. This is also a transparent record.”

“Even if the transfer tax policy and the Artist’s Resale Right are operated, if the person does not register what he or she owns, then it’s all in vain,” Kim added.

He further explained that while forgeries are a problem around the world, they’re so prevalent in Korea because of how frequently people try to evade paying taxes here.

As a result, art is often sold in illicit, back-room deals, which makes a piece’s origins incredibly difficult to trace.

But this creates a complicated cycle. The public has come to associate art collectors with tax evasion - even if their collections are legitimately acquired - and so those collectors refuse to register their ownership of pieces, making their origins all the more difficult to determine.

In an attempt to address the matter, the government will hold a seminar on July 7 with the specialists to discuss ways in which the art trade can be made more transparent.

Left: This painting by Jean Louis Forain (1852-1931) displays two children wearing ragged clothes shouting as a painting by their father is sold for 1,000 francs. Right: Kim Whanki’s painting, “Untitled 27-VII-72 #228” (1972) at auction, where it became the most expensive piece of Korean art ever sold. [JOONGANG ILBO,K-Auction]