Banks get tougher on loans

Banks get tougher on loans 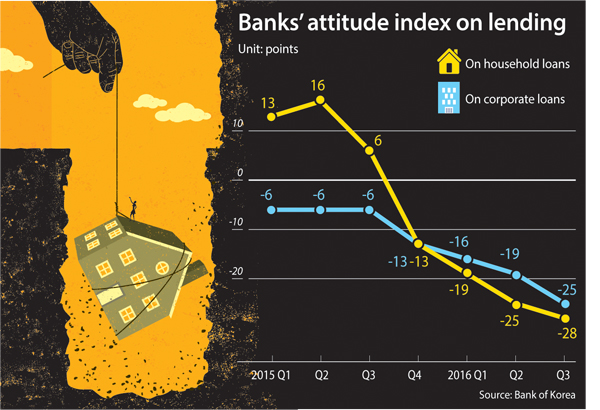 Banks and other financial institutions are planning to tighten screening conditions for borrowers starting this month, a survey by the Bank of Korea showed on Tuesday.

The move comes amid growing concerns about the country’s household debt, especially after the central bank cut the benchmark interest rate to a low of 1.25 percent last month.

According to the BOK survey, an index showing banks’ and other institutions’ attitudes toward borrowers, including corporations and households, has continued to fall since late last year, suggesting that the institutions are growing pessimistic about lending to borrowers due to aggravating credit risk amid growing uncertainties in the economy.

The index representing banks’ attitudes on households fell from -13 in the fourth quarter of last year, going below zero for the first time since 2013. The figure kept declining this year and dropped to -28 for the third quarter.

The same index for large corporations has remained below zero since 2013 as economic uncertainties have remained high for several years. The indicator worsened further this year, hitting -19 for July to September.

“While banks have already toughened conditions for household mortgages earlier this year, burdens are rising as collective loans showed rapid growth recently,” said Choi Nak-gyun, head of the bank research team at the BOK. “They are forecast to enhance screening rules further to help reduce the burdens in the coming months.”

For corporations, banks are projected to be tougher as credit risks have spiked significantly amid restructuring moves in the troubled shipbuilding and shipping industries.

“Credit risks of large corporations are expected to increase in the third quarter because of the restructuring amid low profitability and anemic growth of the companies,” it said.

Although the central bank said households are faring well in terms of financial soundness, credit risks of households may increase as the total household debt nationwide keeps rising and the value of collateral, mostly properties, could soon depreciate.

In an earlier report, the BOK also warned that there were high possibilities of a decline in housing prices in the next two years as the supply of newly built or reconstructed apartments has exceeded demand.

Non-bank institutions surveyed showed somewhat contrasting attitudes about lending. Savings banks and credit card companies said they will maintain current lending conditions for the third quarter, while insurance firms and some credit cooperatives said they will strengthen the conditions.

“Credit card companies might see intensifying competition with other institutions in the midrange lending market, and the competition would be even fiercer if web-based banks officially launch their operations in the second half of the year,” Choi said.

Banks launched loans with rates of about 10 percent on Tuesday, for those with low credit ratings.