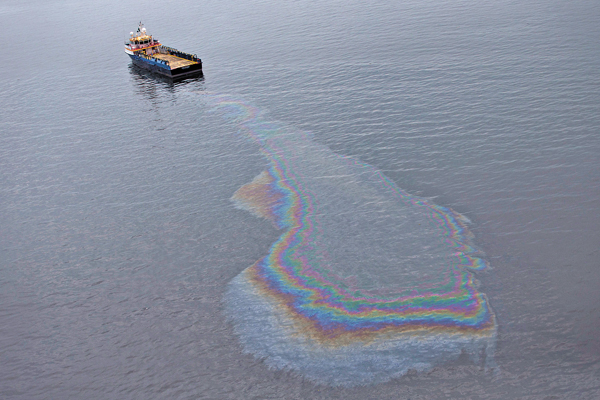 Oil leaks in March in Guanabara Bay, a venue designated for sailing events during the Rio Olympics. This is the latest issue among the long list of problems that Brazil is facing at the moment with the Olympics to start in a month. [AP/NEWSIS]

Sailors complained Monday about an oil slick that turned white boats brown as crews were in town practicing for the Olympics, which opens in a month.

“We’ve never seen anything like this. It was all over the place,” said Finnish sailor Camilla Cedercreutz. “There was no way you could avoid it.”

This is yet another in a long list of problems confronting South America’s first games including the Zika virus, rising crime rates, budget cuts and low ticket sales.

The games will also open with Brazilian President Dilma Rousseff facing an impeachment trial. And on top of all this, Brazil is now mired in its deepest recession in decades.

Cedercreutz said the oil slick filled part of the bay on Sunday, staining her boat from bow to stern.

“This is only our second time in Rio,” said Cedercreutz, who has qualified in the 49erFX class. “We’ve heard it was really bad. You get mad because it shouldn’t be like this anywhere. It shouldn’t be this dirty. But there’s nothing we can do about it.”

Cedercreutz’s sailing partner Noora Ruskola said other sailors told her: “Your boat looks like a toilet.”

Guanabara Bay is severely polluted, filled with bacteria and viruses, but sailors have less frequently complained about industrial pollution in the giant bay.

Spanish sailor Jordi Xammar, who will compete in the 470 class, said he saw the slick “and tried to avoid it.”

“The boats were completely brown,” he said. “But the worst thing was we saw a lot of dead fish.”

Xammar said this is his fourth time in Rio, and he’s seen the water “improve a bit. It was yellow-green last year.”

Rio organizing committee officials say the venue is safe, although independent studies by The Associated Press show high levels of pathogens in waters that Rio is using for sailing, rowing, canoeing and open-water swimming.

World Sailing, the governing body of the sport, said Monday it was “not in a position to comment.”