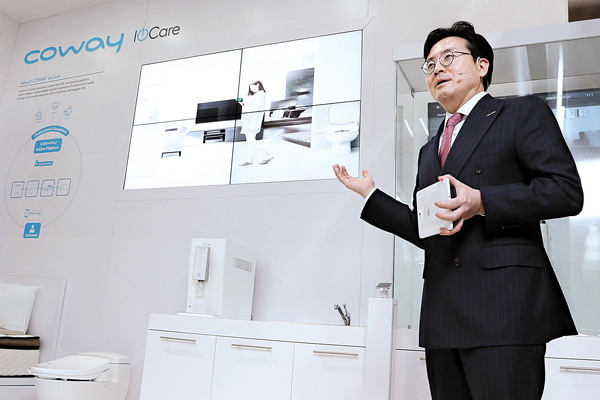 Coway CEO Kim Dong-hyun introduces a smart home solution at the Consumer Electronics Show in January. The company is under fire after nickel compounds were found in water dispensed from three models. [JOONGANG ILBO]

Coway, Korea’s No.1 water purifier rental company, is in trouble after nickel compounds were found in water dispensed from three models - and the company allegedly covered up the problem for a year.

Last July, the company discovered that some metal plating on an evaporator in three models peeled off and ended up in water.

The company decided to cover up the problem and rather visited each subscriber’s house to fix the faulty ice-making water purifiers.

A nickel compound known to be related to cancer when breathed in was a part of the peelings.

The U.S. Environmental Protection Agency limits daily intake of nickel to less than 0.5 milligrams. The amount of nickel compounds found in Coway’s purifiers was about one tenth of the limit, according to the company. Coway insists the amount of nickel was too small to cause harm to the human body.

As public concern grew, the government started to investigate.

“We will be forming a team to see whether it is just a technical issue like the company says or a bigger problem related to public health,” said a spokesman from the Korea Agency for Technology and Standards. It is asking support from related institutions such as the Korea Consumer Agency.

The company officially released a public apology after the news was aired on television.

According to Coway, it failed to report the problem to affected customers to “prevent confusion” and thought “taking fast action was a bigger priority.”

“We immediately tested our products and asked medical professors and related institutions and found the nickel compound contained is harmless and would not build up inside the body as it is ingested and not inhaled,” a spokesperson from Coway said. “If we found it harmful [a year ago] our measures would have been different.”

The company visited each household with the models and changed the problematic parts, saying they were being given an “upgrade” through a regular check-up. According to a release by the company, 97 percent of about 87,000 purifiers have been fixed through such visits since July last year.

Though most are fixed, customer trust has plummeted, especially after Oxy Reckkit Benckiser shook the confidence of consumers in household appliances with its fatal humidifier disinfectant, which allegedly killed and sickened some 180 people.

“The maintenance people just came by as if they were giving us regular service,” a renter of the problematic water purifier posted on Coway’s Facebook page on Monday. “If they had just explained to me about the situation then, I would have been less infuriated.”

According to the World Health Organization’s 2005 guidelines on drinking water, “International Agency for Research on Cancer concluded that inhaled nickel compounds are carcinogenic to human and that metallic nickel is possibly carcinogenic. However, there is a lack of evidence of a carcinogenic risk from oral exposure to nickel.”