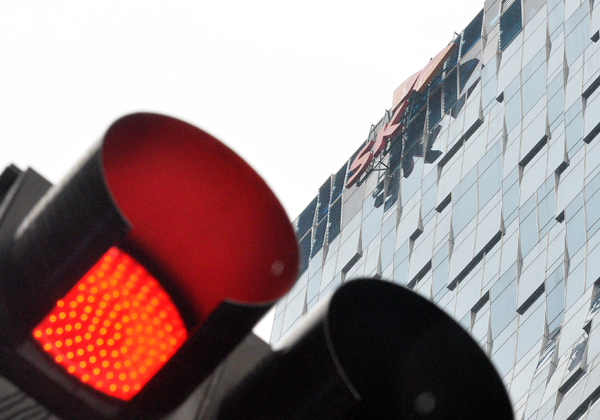 Many newspapers including the Korea JoongAng Daily published stories Tuesday saying the deal had been conditionally approved based on sources.

The antitrust agency said in the report Monday that after seven months of review it was prohibiting SK Telecom from acquiring a stake in CJ HelloVision or the two companies’ merger. It cited the fear of “giving birth to a dominant player in the regional cable channel market” should the deal be materialized, according to SK Telecom.

Under the Fair Trade Act, any company with 2 trillion won ($1.7 billion) or more in revenues or assets should go through a review by the FTC if it wants to acquire another company.

The telecom arm of SK Group was seeking to acquire 53.9 percent of CJ HelloVision from its affiliate CJ O Shopping for 1 trillion won and merge it with its wholly-owned subsidiary SK Broadband.

After reviewing the proposal for seven months, the FTC sent a report to SK Telecom Monday. Sources in the industry told reporters that the report approved the deal but with various conditions that could force SK Telecom to give up on the deal. Those reports were erroneous.

SK Telecom and CJ HelloVision have overlapping fields of business. The former runs an Internet-protocol TV (IPTV) service, similar to cable TVs, and its subsidiary SK Telink is No. 2 operator of budget mobile phone subscription service, otherwise known as “altteul phone.” The latter is No. 1 in both cable TV and altteul phone business in terms of the number of subscribers.

The report sent shockwaves across both companies. They issued statements opposing the FTC decision.

“We take [the decision] as extremely shocking,” said SK Telecom in a statement. “It is deeply regrettable that the investment plan has fallen apart and we are deliberating on various measures to tackle the situation.”

“Even if the two companies merge, the number of [cable TV] subscribers would be 1 million less than KT’s [IPTV subscribers], taking the No. 2 position,” said CJ HelloVision.

An SK Telecom spokesman said the company didn’t expect such a result, adding that it got hold of the report late in the afternoon. But given that the FTC’s report was not necessarily the end of the M&A procedure, the company vowed to make the best out of the two weeks it has been given to go through the document and submit feedback. After the FTC makes a final decision based on the feedback, the Ministry of Science, ICT and Future Planning will conclude on the issue in consultation with the Korea Communications Commission.

Telecom rivals, KT and LG U+, welcomed the FTC’s decision, saying the agency was “making the right assessment about the worrisome outcome of top telecom operator and top cable TV operator’s merger.”