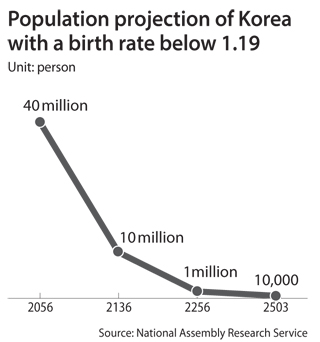 Pledging to make a bipartisan effort to tackle the country’s low birth rate and rapidly aging population, the ruling Saenuri Party selected Rep. Na Kyung-won on Tuesday as chairwoman of a special committee of the National Assembly to examine these issues, and the legislature will formally approve its formation today.

“The low birth rate and aging population are the most serious challenges facing our society,” Rep. Kim Gwang-lim, the ruling Saenuri Party’s chief policymaker, said Monday at the leadership meeting.

“We will make it the top priority of the 20th National Assembly and cooperate with other parties to prepare for a better future. Since 2006, the government created many policies and spent enormous sums, but with little effect, while the problems have worsened,” Kim said. “We must review the government’s policies to find out if they were just short-term, stopgap measures.”

A population simulation by the National Assembly Research Service showed last year that the country’s population will become completely extinct by 2750 if the birth rate of 1.19 children per woman continues.

Kim also told the JoongAng Ilbo that the issue will be proposed at the upcoming economic consultation meeting with the opposition parties and the government.

The meeting was formed based on the agreement among President Park Geun-hye and floor leaders of the Saenuri Party, Minjoo Party of Korea and People’s Party in May. Yoo Il-ho, economic deputy prime minister, and chief policymakers of the three major parties will participate in the meeting.

“During the Roh Moo-hyun administration, the government attempted to create a basic law to address the problem of our low birth rate and aging society, but it became a lesser priority during the Lee Myung-bak and Park Geun-hye administrations,” Rep. Byun Jae-ill, the chief policymaker of the main opposition, said. “But this is not a long-term issue. It’s an urgent matter that we must do our best to resolve right now.”

Byun said the Saenuri Party must work together with the Minjoo Party to resolve these issues.

He then said the party has prepared various policies, such as a plan to overhaul the state health insurance payment system, which will be submitted to the National Assembly this week.

“We are also pushing forward a plan to increase the basic pension to the elderly,” he added.

“The youngsters are delaying their marriages due to unemployment and this has led to the low birth rate,” Byun said. “We cannot just let the market decide youth employment. We must create a drastic measure.”

Byun said the Minjoo Party is also pushing forward policies to invest in a state pension fund to provide housing for newlyweds and to create better childcare programs.

Last month, a study group was also launched by the ruling and opposition lawmakers to address the issue. Agenda 2050 was launched by heavyweights from three major parties, including Rep. Kim Chong-in, acting chairman of the Minjoo Party, Reps. Yoo Seong-min, Kim Se-yeon, Na of the Saenuri Party and Rep. Kim Song-sik, chief policymaker of the People’s Party.

At the launch ceremony, Rep. Kim Chong-in said the widening wealth gap must be resolved to improve the birth rate. “When artificial intelligence and robot technologies advance and machines increasingly replace manpower, it will lead to an income loss,” he said.

Recently, Switzerland conducted a referendum on a proposal to introduce a guaranteed basic income for all. A monthly income of 2,500 Swiss francs ($2,555) for adults was proposed, but Swiss voters overwhelmingly rejected the plan. The supporters had argued that since work was increasingly automated, fewer jobs were available for workers.

Rep. Kim Se-yeon, who proposed the study group to create a bipartisan law on the issue, said the group wants to explore measures that are creative and new, taking a long-term view of the issue. “For example” he said, “we can consider allowing parents a total of six years of childcare leave.”