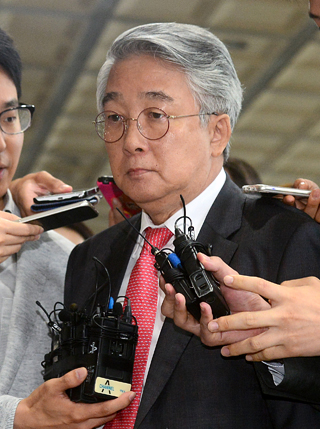 Prosecutors summoned on Tuesday former CEO of the Korean branch of Audi Volkswagen, Park Dong-hoon, to question him about whether he was aware of the company’s sale of vehicles with rigged diesel-emission test results during his eight-year tenure.

Park, 64, briefly spoke to reporters before entering the Seoul Central District Prosecutors’ Office, denying his involvement in or knowledge of any manipulation of emissions tests.

Park headed the Audi Volkswagen Korea (AVK) unit for eight years from 2005 until 2013, when he moved to Renault Samsung Motors.

He currently is CEO of Renault Samsung, the local unit of the Renault Group.

The questioning was still underway as of press time Tuesday. Though he denied his involvement or knowledge of the falsified test results, Park was expected to have been questioned as to whether he had known about the rigged tests, falsified any results or authorized the uncertified swapping of any parts during his tenure.

Prosecutors placed a ban on Park from leaving the country.

Park’s questioning came after prosecutors detained an executive of Audi Volkswagen Korea on June 24 for the company’s rigged emissions and noise-level tests.

According to investigators, the 52-year-old official, surnamed Yoon, manipulated the engine control unit (ECU) of the Golf model after receiving e-mail directions from Volkswagen AG, so that emission levels would appear lower than they actually were.

It was the first time that the company’s high-ranking official was detained over the course of the scandal.

The ECU refers to an embedded-software system that controls an automobile’s exhaust gas recirculation, and modifying this requires a separate certification from the Korean government, which the carmaker failed to acquire.

Prosecutors tentatively concluded that the AVK manipulated a total of 139 test results between August 2010 and February of this year in order for its vehicles to pass inspections before entering the Korean market.

The summoning of Volkswagen’s former Korean branch head came a week after the troubled automaker agreed with U.S. authorities to pay up to $15 billion in compensation, the largest-ever payout in the automotive industry. But in Korea, the company still refuses to pay.