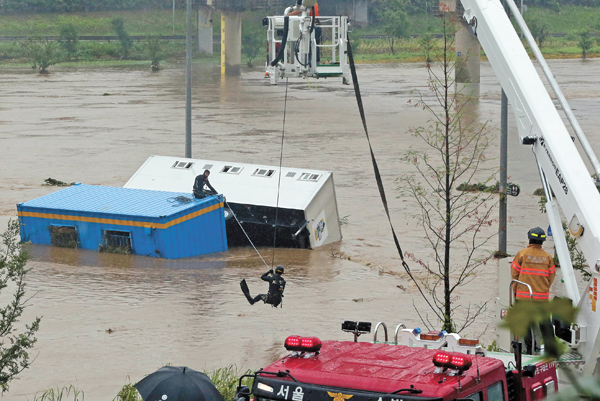 Rescue workers are dispatched to the Jungnang Stream in eastern Seoul on Tuesday, as heavy rains and flooding washed away temporary structures. [KIM SEONG-RYONG]

In the torrent of rain that hit central Korea Monday and Tuesday, roads flooded, traffic was paralyzed, some 2,000 households lost power for hours, and at least four people went missing.

The Ministry of Public Safety and Security issued a heavy rain warning in Seoul around 9 a.m. Tuesday, the first for the city this year. A heavy rain warning is issued when the amount of expected rain exceeds 110 millimeter (4.3 inches) in six consecutive hours.

From Monday to Tuesday morning, it rained 88 millimeters in Seoul alone. The city expects another 50 to 100 millimeters through Wednesday.

As the torrential rain hit the capital city on Monday night, the Central Disaster and Safety Countermeasures Headquarters in Seoul sealed off the popular walking paths on either side of the Cheonggye Stream from Cheonggye Plaza in central Seoul to the Gosanja Bridge in Dongdaemun District of eastern Seoul.

As the Jungnang Stream flooded the Donbu Expressway at around 7:30 a.m. on Tuesday, the Central Disaster and Safety Countermeasures Headquarters in Seoul closed off access to the road from Wolgye-1 Bridge to Jangan Bridge.

The headquarters also closed off vehicle access to Jamsu Bridge and the road below the Sangam Railway Bridge on Tuesday morning.

Some 2,000 units of an apartment complex in Banghwa-dong, western Seoul, lost power around 4:00 a.m. Tuesday. Around 7:00 a.m., a house embankment crumbled in Namsan-dong in central Seoul. No injury or casualty has been reported.

Sewers flooded in some 20 districts including Songpa District of eastern Seoul.

Seoul was not the only region hit with the torrents from Monday.

Heavy rain warnings were issued in 10 cities and counties in the northern region of Gyeonggi, including Uijeongbu, Pocheon and Yangju.

In Sinbuk-myeon of Pocheon, a cargo truck lost control in the rain and hit a van, injuring a man in his 60s.

In Jeongseon County, Gangwon, four people in their 60s and 70s went missing Monday night. It rained some 175 millimeters in the county that night.

Four locals got in a car around 9:00 p.m. after finishing a traditional folk song activity at a community center. When none of them made it home after a few hours, a relative called the police.

The car was found in a stream near a valley in Gwangdeok-ri some 7 to 8 kilometers (4.3 miles) from the center. No bodies were found inside the vehicle, and police dispatched some 400 officers to search for the missing seniors.

According to the KBS on Tuesday afternoon, the rain drove members of some 120 households to temporary shelters, grounded 57 domestic flights, flooded some 240 walking trails and 440 farms throughout the country.