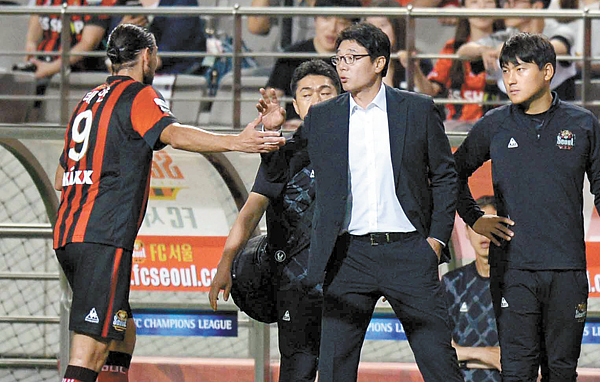 FC Seoul’s new manager Hwang Sun-hong, center, gives orders to Dejan Damjanovic during a match against Seongnam FC on June 29. Hwang has yet to grab a win with his new club. [NEWSIS]

FC Seoul has yet to grab a win in the K-League Classic since its new skipper Hwang Sun-hong took the helm last month. Although the players and the manager have yet to adjust to each others’ styles, time is ticking as Seoul prepares for a showdown against Ulsan Hyundai FC this weekend.

As soon as former manager Choi Yong-soo resigned from the post, it was former national team striker and Pohang Steelers manager Hwang that Seoul turned its eyes on. What the club had in mind was by bringing in a manager who has repeatedly proven himself as a competent boss, Seoul would continue with its run in the league.

But contrary to what the team anticipated, Seoul’s run came to a stop suddenly. Hwang’s debut match against Seongnam FC on June 29 was a disaster. After Seoul’s star striker Carlos Adriano scored an opener in the 13th minute, Seoul quickly crumbled and yielded three goals. Their feeble attempt to add goals was rendered useless by Seongnam’s defenders.

The next and second match with Hwang at the top was against Sangju Sangmu FC on July 2. The match against the football side of the Korea Armed Forces Athletic Corps, who just got promoted to K-League Classic, was supposed to be a rather easy win. But, after taking the lead in the second half, Sangju had the momentum. Even though Seoul netted an equalizer, Sangju reciprocated with a goal in the injury time to defeat Seoul 2-1.

Seoul, who used to vie for the top position with Jeonbuk Hyundai FC, was no longer the team that it used to be, netting an average of two goals per game. Tied for second with Ulsan, fans question whether Seoul will be able to maintain its ranking after this week’s game.

A little bit of turmoil is natural when a team undergoes as dramatic of a transition as a managerial change. Even for a renowned manager such as Hwang, it would be impossible to change the team that has been instilled with Choi’s style in the past six years. What Hwang needs right now is some time to inspire the players with his football philosophy and learn how they like to approach this game. “Everything is new right now,” Hwang said. “Sudden change would be difficult and we need time. What’s crucial right now is minimizing that time as much as possible.”

But obviously, time is ticking. Hwang needs to demonstrate that he can in fact lead the squad that is shooting for triple crowns by winning K-League Classic, the Asian Champions League (ACL) and Korean FA Cup. The first match of ACL quarterfinals is slated for August 24 against Shandong Luneng Taishan F.C. of China. Hwang needs a win then to keep Seoul’s hope for triple crowns alive.

He does have some room to breathe in the league. Seoul can always recuperate and make up for losses later in the season. But the ACL is different. If Seoul loses the quarterfinals, it will be knocked out of the competition. Its shot at the ACL title is one of the main drivers that push Seoul forward this year. Once the chance at the ACL trophy is gone, Seoul is then without an important motivator to keep its fighting spirit alive. Seoul might not be able to recover from it until the end of the season, costing them not just ACL but the K-League title and FA Cup.

“I consider the ACL the most important of all the competitions we are in,” Hwang said during his inaugural press conference.

Going through trials and errors in the league right now is perhaps a necessary procedure. But he does not have all the time in the world. Since his June 27 inauguration, he has been given 59 days, a golden time for Seoul to fully bounce back from the growing pains stemming from the transition.