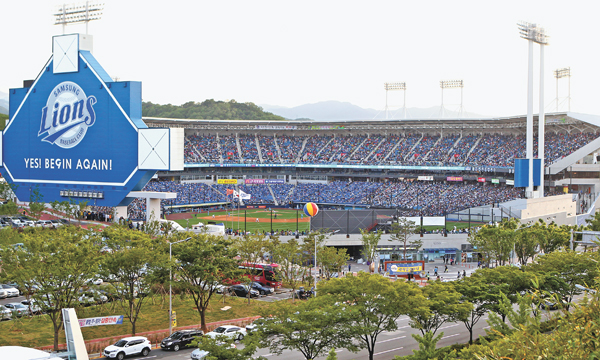 Daegu Samsung Lions Park is filled with spectators during a home game in May. After spending more than 30 years in the old venue, the Samsung Lions finally moved into the new ballpark prior to this season. [SAMSUNG LIONS]

After spending more than three decades in an old ballpark, Samsung Lions finally settled into a new home before the season kicked off, the Daegu Samsung Lions Park. Since its move, the Lions are struggling in the league, but the club is seeing unprecedented success business-wise.

The Lions is an elite club in the Korea Baseball Organization (KBO) with more wins than any other teams in the league. The only flaw was the dilapidated Daegu Baseball Stadium, where they spent 34 years from 1982 to 2015. It was the oldest home ballpark among the 10 KBO clubs. Lions star Lee Seung-yuop, who’s been with the team since 1995, recalls seeing a rat in the old locker room. “That freaked me out,” said Lee.

But, the good comes with the bad. A new stadium came with the worst season records that the Lions have experienced since the team’s establishment. As of Wednesday, the team is ranked ninth in the KBO with 32 wins and 44 losses. The club is behind the Doosan Bears, whom the Lions competed for the Korean Series title last year, by 21 games. On the contrary to season records, the club’s business in the new home is booming.

The company’s effort to maximize the earning potential for the club was accelerated with the completion of the new park, which enabled the club to provide fans with various events and amenities.

One of the events that the Lions started in the new stadium is “Party on Fridays and Saturdays.” In the “blue zone,” the cheering section by the third base, fans gather after the games on Fridays and Saturdays for parties. The zone is transformed into a temporary club for about 30 minutes and as many as 3,000 fans stay around to attend. The club installed special lights and cheerleading squads lead the party. “We were wondering how many fans would actually enjoy the event when the team loses games,” said a marketing staff member of the Lions. “But despite our worries, we noticed that fans are very much into having a good time.”

These marketing tactics, along with fans’ expectations and curiosity toward the new stadium, engendered tremendous success for the Lions. As of Wednesday, the Lions are listed third in the total number of fans attending its games with the number reaching 535,495. The only two teams above the Lions are the Seoul-based teams, the Bears and the LG Twins. The Lions’ marketing team suspects that the team will top its records in number of fans this year. The number of average spectators for the Lions has risen 98% from 7,208 to 14,292.

More crowds directly translate into higher profit. Earnings from admissions for the Lions so far is 5.8 billion won, far surpassing the last season’s total of 4.8 billion won. With profit from admissions skyrocketing, the club is expected to see net gain, compared to last year when the team saw a net loss of 17 billion won.

As more fans find their way to the stadium, it is expected that profit from various amenities at the venue, such as food stands and souvenir shops, will increase as well.

Still, the club is cautious to celebrate the rise in spectators.

“We need to provide fans with high quality content and services at the high quality facility,” the Lions marketing staff added. “Right now fans’ curiosity about the new stadium is one of the main reasons why we are seeing unprecedented number of spectators attending our games. What’s important now is to not disappoint them.”