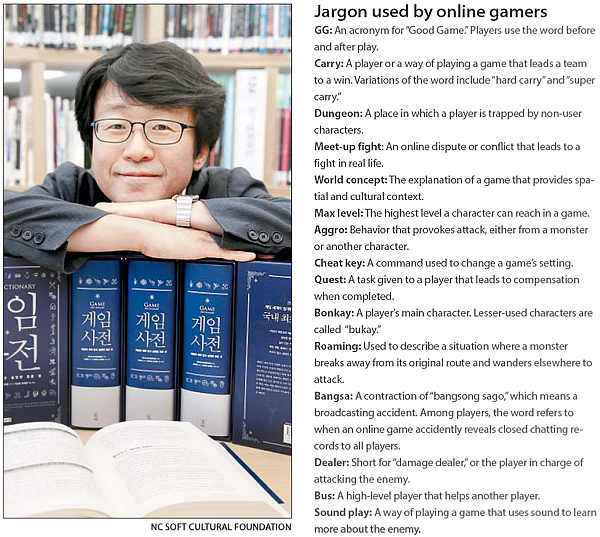 If the word “dealer” makes you think of a casino, and if “roaming” brings to your smartphone, chances are you’re not an online gamer.

To people who play games online, a dealer typically refers to the person who attacks the enemy. Roaming, on the other hand, refers to when a monster breaks away from its original location and wanders elsewhere to attack.

Recently, the first dictionary that explains 2,188 pieces of gaming jargon has been published by Hainaim Publishers.

“Games are a precious cultural heritage that have much popularity, business value, artistic quality and academic value - but that value has been denigrated so easily,” said Yoon Song-yee, the chief executive officer at NC Soft, the Korean game production giant. “As a result, there wasn’t any systematic study of it, or any dictionary that records its academic value.”

This recent book is intended to fix that, Yoon said.

“When a new language is recorded in a dictionary, it means that it gains a renewed status as ‘knowledge,’” said Lyou Chul-gyun, one of the dictionary’s authors.

Lyou is a professor of literature in the graduate program at Ewha Woman’s University, and also publishes novels and other works under the pen name Lee In-wha.

The dictionary’s headwords were chosen by the writers, an advisory committee and members of the public, who were able to submit entries through a contest.

The final selection of words was chosen through an analysis of “Inven,” Korea’s largest online gaming community.

“Item” was the word most frequently used on the site. Originally used to describe an object or commodity, the new dictionary defines it as: “An imaginary object or subject that game players can obtain while playing the game.”

The entire definition runs eight pages, and includes a description of an infamous incident in which a gamer managed to grab all the items in a particular game and then suddenly logged off, taking his loot with him.

“The word ‘hello’ made its appearance in Oxford dictionary only six years after Edison called out the word via telephone,” said Prof. Lyou. “In comparison, it took 20 years for the word ‘item’ to be recorded in the Korean dictionary since online games were first commercialized in Korea in 1996.”

In fact, many people use words derived from online gaming in their everyday lives and may not even know it.

The word “carry,” for example, was repurposed by gamers to refer to a way of playing a that leads to his or her team winning, but it’s often used offline to describe an simply an act that helps others.

Similar double meanings can be found for words like “aggro” (a situation in which a person intentionally provokes others) and “lag” (when action is delayed due to a bad internet connection).

Readers can also get a glimpse from the dictionary on how Korean society has changed.

The definition of the word “G-Learning,” which means a digital learning method, describes how Korea’s education system has evolved with digital technology. It includes a description of the “shutdown policies,” by which kids under the age of 16 are banned from playing online games after midnight.

“This dictionary is expected to enhance understanding of gamers, connecting parents and children,” said an NC Soft executive.