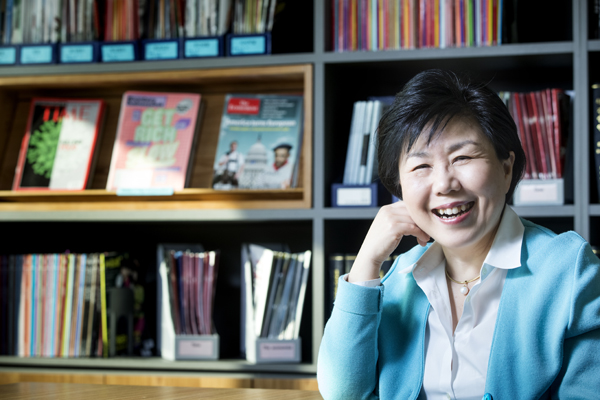 Choi Jung-wha is a professor at the Graduate School of Interpretation & Translation who has served as a conference interpreter for almost 30 years. She recently published a new book, “K-Style” that introduces different facets of Korean culture. [JOONGANG ILBO]


The career of Choi Jung-wha has been marked by many firsts.

Among them, she was the first Asian to gain a doctorate from the prestigious School of Interpretation and Translation at the University of Paris 3. She was also Korea’s first conference interpreter, which involves simultaneous translation and is one of the most complicated and high-stakes kinds of translation work.

Over the past 30 years, she has participated in more than 2,000 international conferences and summit talks. She has translated between Korean, English and French for former Korean presidents Chun Doo-hwan, Roh Tae-woo, Kim Young-sam, Kim Dae-jung and Roh Moo-hyun as well as other world leaders.

Choi seems to see translation as more than just rendering one language another. Rather, her work embodies a belief that true translation involves making an entire culture accessible to all, and serving as a representative of that culture. 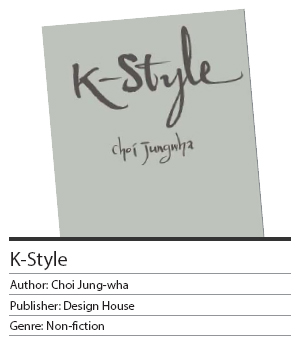 Along those lines, she founded the Corea Image Communication Institution in 2003 to research ways of improving Korea’s image around the world and conduct various events. She serves as the organization’s president.

The organization gives annual prizes like the Korea Image Stepping Stone Award and Korea Image Budding Youth Award “to people, organizations or events for their contribution to promoting the image of Korea to the world,” its official website explains.

She has written 31 books mostly related to language learning and translation, and in 2011, she published her first book on Korean culture, “This is Korea.”

Her most recent book is “K-Culture,” which dives deeper into various aspects of Korea. The book was written in Korean, but English and French translations are forthcoming.

“Of course, conducting various events for cultural exchange is important,” said Choi, during a phone interview with Korea JoongAng Daily. “However, I thought that writing about Korean culture would also contribute a lot to letting foreigners learn more about Korea. Writing lasts for a long time.”

The topics she chose focus on the everyday lives of Koreans, and the distinctive way that Koreans live.

In the summer category, for example, she discusses bingsu, the summertime treat that has once again become popular among Koreans. She tracks how Koreans were first introduced to the dessert - shaved ice covered with things like red-bean paste and tteok, or rice cakes - and talks about how Korea soon became oversaturated with bingsu cafes.

She also reveals various age-related customs, such as why people celebrate the 100th day of a baby’s birth and the age system under which a baby becomes one-year-old as soon as he or she is born.

The book can serve as an enlightening guide for both Korea novices and people who have been here for some time, which is exactly as Choi intended.

“In fact, it is the trivial questions that foreigners most want answered,” she said. “I focused on describing and analyzing the contemporary lifestyle shared by Koreans, rather than putting emphasis on the historical details and traditional cultures of Korea,” she said, adding that there is already a plethora of books available describing the nation’s history.

“Instead, I tried to track where our contemporary culture came from,” she said.

Choi emphasizes that she focused on remaining neutral in her evaluation of Korean culture.

“I don’t judge on cultural phenomena because all aspects of our culture should be perceived as they are,” Choi said.

“For example, when I wrote about the prevalence of plastic surgery, I explained that it comes from the long-lasting tradition of Korea that is influenced by Confucianism, which emphasized decent appearance and refined clothing.”

“I think [my neutral attitude] is why foreigners like the book,” she added.

Many of her ideas for chapters stemmed from questions she had been asked by the foreigners she works and interacts with, Choi said.

“Foreigners ask me a lot of questions. I take notes on what they ask and develop the issue further on by researching it in-depth.”

Choi recognizes that in an era of globalization, culture changes rapidly - and this is particularly true in Korea.

In response, she plans to write a new book in five years that tracks how things have changed in her country.

With the most recent work, however, the most honest reviews will undoubtedly come from foreigners - who have been positive about it thus far.