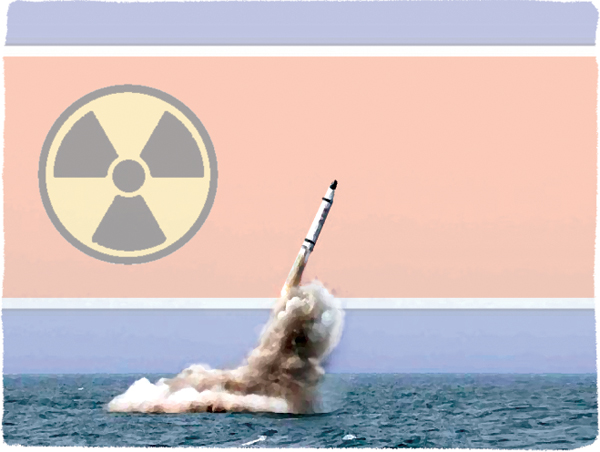 On the 66th anniversary of the Korean War, the security situation on the Korean Peninsula is in dire straits. The core of the crisis is the strategic weapons and defense technologies of North Korea, such as nuclear and missiles programs. North Korea has already stipulated that nuclear possession is in its Constitution. At the party convention in May, Pyongyang once again emphasized the continued parallel pursuit of nuclear and economic development.

The strategic weapons tests that have continued since January show that the North Korean leader, Kim Jong-un, oversees these programs and considers them his biggest accomplishments. In the course of testing, various technological issues and limits of operating and maintain the programs were exposed, but Kim’s obsession over nuclear weapons remains unchanged.

A bigger problem is that his ambition is growing and intensifying beyond our expectation. Despite failures and accidents, Pyongyang went on to launch the Musudan missile, which reached an altitude of 1,400 kilometers (870 miles). Once its engine becomes more stable, North Korea will connect two or four engines to extend the range to the level of an inter-continental ballistic missile.

The power of the atomic bomb became greater through four experiments, and there is a possibility that North Korea has developed a hydrogen bomb. It has also made significant progress with smaller warheads, satellites, submarine-launched ballistic missiles (SLBMs), jamming technology and drones. If Pyongyang develops attack strategies maximizing electromagnetic pulses (EMPs) with high-angle launches and high-altitude nuclear explosions, Korea’s defense system will not be able to respond to such attacks.

Here, Seoul’s poor intelligence collection and analysis capacity has been exposed. Korean agencies were confident about their prior detection of nuclear experiments, but they failed to learn about the test until a civilian research institute detected earthquake waves. They also showed limited detection of signs of mobile missile launches and tracking of the high-altitude launch. It is a serious issue that Korea is an involved party of the North Korean nuclear issue but relies on other countries without taking a lead in information collection and analysis. It is doubtful that foreign experts are familiar with the internal situation in the North, or that they would help Korea’s policy-making process or would take serious risks for Korea. Moreover, it is worrisome that experience and expertise as well as data are not accumulated domestically.

Analyzing nuclear information requires a group of well-organized and trained scientists and engineers, collaboration among them and long-term learning. But this is not happening in Korea. Related agencies have few scientists and engineers, and the job rotation and age limit for grades do not allow officials to build up experience. As these agencies are alienating, they are not popular among young, talented candidates.

Korea’s response plan against the nuclear threat is even more confusing. Military authorities announced that we would respond with our “Kill Chain” system, aimed at destroying North Korean missiles before they are launched. However, in order to employ the Kill Chain, we lack prior tracking and detection. Korea Air and Missile Defense (KAMD) is not effective against high-altitude attacks. They are not enough to reassure citizens.

The government must find ways to tackle the problem. We cannot keep up with North Korea’s rapidly expanding strategic weapons program with the current plan, which relies on foreign intelligence. In order to prevent a flood, weather forecasting systems need to be enhanced and dams should be built. While we make plans, we should also plan for the future and put up barriers in advance.

We have a late start, but we need to establish a military-civilian joint entity to initiate the development of a next-generation missiles-defense system for Korea. Research into key technologies should be strengthened, materials and energy sources need to be developed and young professionals need to be trained. International cooperation will help Korea shorten the development time for each of these. Using the Korean Peninsula’s short offensive depth, we can develop a cheaper and more effective defense system like the one Israel has.

North Korea claims that its scientists made their developments on their own. We have outstanding researchers and infrastructure. When politicians support them in order help them accumulate and utilize expertise, our science and technology can overwhelm the North. Perhaps we can encourage Pyongyang to have a dialogue based on this leverage and bring reunification.


*The author is a senior researcher at the Science and Technology Policy Institute.