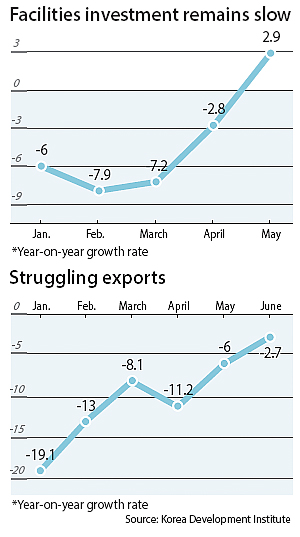 Korea’s state-run think tank once again warned that overall economic activity is still slow even though the sluggishness in production-related indicators moderated.

Retail sales and the value of completed construction projects improved significantly compared to a year ago. However, exports and facilities investment remained in a slump and the manufacturing capacity utilization rate stayed low, weighing on the economic recovery, the Korea Development Institute said Wednesday in its monthly analysis.

“The manufacturing capacity utilization rate remained notably low at 72.8 percent, indicating persistent sluggishness in overall production,” said the institute. The figure for May is 0.7 percentage points lower than 73.5 percent of last year’s.

The data showed that only about 261,000 people found new jobs. “Employment growth in manufacturing slowed, weighing down on the total employment growth, while continued declines were observed in the rates of labor force participation and employment,” KDI added.

In fact, May’s rate of labor force participation was 62.3 percent and employment hit 60 percent, both down 0.1 percentage point from the previous month, continuing the downward trend since February.

The nominal regular wage in a workplace of more than five full-time employees rose 3.4 percent in May, pointing to a continued slowdown as well. The rate had increased by more than 4 percent from December to February, but fell to the 3 percent level in March.

June’s exports fell 2.7 year-on-year, a smaller slump than the 6 percent loss in the previous month. “Exports exhibited a slower decline temporarily due to the sharp increase in vessel exports, but the slump in exports is deemed to sustain,” the report said.

Retail sales, on the other hand, showed improvements mainly in durable goods.

Sales in May grew 5.1 percent year-on-year, deviating from the previous month’s 4.2 percent. “Sales of durable goods rose 12.1 percent, largely thanks to passenger car sales that rose by 20.8 percent, and that of non-durable goods rose 3.2 percent on the continued favorable trend in cosmetics, which saw its sales grow 13.2 percent,” said the KDI.

Construction investment also remained strong in May and rose 20.2 percent compared to the previous year.

“Investments on building construction rose 25.2 percent year-on-year and maintained a high growth pace mainly in non-residential buildings, while civil engineering expanded 13.1 percent, largely thanks to the increase in the power plant sector,” the KDI added.

KDI forecasted this year’s economic growth rate will be 2.6 percent. The government, which had long hoped for a 3 percent goal, finally lowered the outlook to 2.8 percent last month.