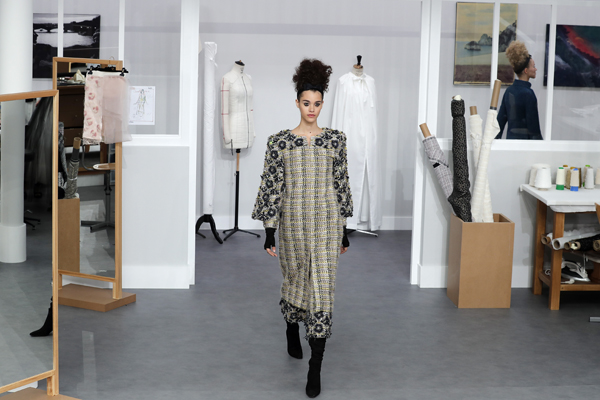 PARIS - The stars mingled among the tailors, dressmakers and seamstresses at the Chanel couture fashion show Tuesday that saw Karl Lagerfeld transport the behind-the-scenes ateliers to the catwalk floor for their 15 minutes of fame. It proved that the fashion industry does, occasionally, give back the love.

Here are some highlights of the fall-winter 2016 collections.

Will Smith and daughter Willow were among headlining front row VIPs at Chanel’s Grand Palais show, swooping in to thank Lagerfeld effusively after the show. The couturier held court after the collection next to the myriad artisan tables, sewing machines, mirrors, silk and cotton bobs, mannequin busts and real-life atelier seamstresses who worked diligently in front of guests even as the show took place.

Fashion Week regular, Oscar-nominated actress Jessica Chastain, praised Lagerfeld for championing the workers who rarely get a piece of the glory, yet who have often been with the house for decades.

“Sometimes, with each piece you forget how many hours are spent on the beading and the intricacy of the embroidery of each piece,” Chastain told The Associated Press, wearing a pale embroidered Chanel jacket and sheer silk blouse.

“It was very special to have that showcased. I love these women. I love the work that they do. And I think that this collection actually really personified the Chanel house and also the work that goes behind everything,” she added.

Lagerfeld said that since the famed rue Cambon atelier was too big to transport in its entirety, tailors and dressmakers who didn’t get a chance to attend the morning show would have their moment in the spotlight during a second showing.

Chanel’s designer added that despite huge advances in technology such as laser cutting and enhanced embroidery, much of the design work “is still made in the way it was made a hundred years ago.”

It was a graphic and highly structured collection this season for Chanel that riffed nicely off the steely architecture of the Grand Palais venue.

Piled-up ethereal hairstyles added to the play on shapes.

Lagerfeld’s fashion mastery was on full display - to produce what he called his “modern graphic effect.”

Shoulders were beveled and cut at extreme angles to create an optical “standing up” style that gave the illusion of a flat-front to many of the looks. They were delivered, as ever, in fastidiously beaded clusters on autumnal shades, or else embroidered in shimmering threads.

Eveningwear was, so said Lagerfeld, inspired by the work of 19th-century English illustrator Aubrey Beardsley _ whose graphic drawings were evident in shoulders and hems sporting crests of feathers, and dresses that flared out in soft cages.

Actor Bradley Cooper was among celebrity guests who partied the night away with canapes and champagne at the storied 19th-century town house the Hotel Salomon de Rothschild.

The uber-cool strobe-lit event marked the launch of Kenzo’s new fragrance _ the first created by the current designers Humberto Leon and Carol Lim.

Leon and Lim said the scent mixes the freshness of their home state of California with a dash of French flowers.