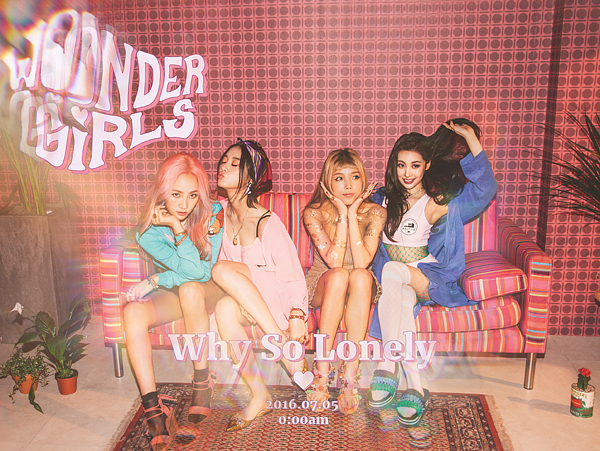 Wonder Girls - composed of Yeeun, Hyerim, Yubin and Sunmi (from left to right) - released their latest digital single “Why So Lonely” on Tuesday.

When the Wonder Girls debuted in 2007, it was quickly clear they weren’t the typical cutesy K-pop group.

Over the nine years that followed, the members have adventurously tried on different styles, going retro for one album and provocative the next.

Their latest effort, the three-song digital single “Why So Lonely” released Tuesday, shows them experimenting with the reggae and flexing their artistic muscles.

The members reportedly wrote the songs and played their own instruments on the album.

It’s also the first time the Wonder Girls have come out with a title track that wasn’t written by JYP Entertainment head Park Jin-Young.

Until now, the singer-producer has written at least one song for every Wonder Girls album or EP, and it has always been chosen as the title track.

The title track for “Why So Lonely,” with its reggae influences, offers an addictive guitar riff and rhythm changes.

Despite being harshly criticized last year for their clumsy instrumental skills on their third regular album “Reboot,” the members have clearly buckled down and made improvements.

All said they are “still not good enough,” but were “eager to work on the songs on their own, without any help and from scratch.”

Since its release on Tuesday, “Why So Lonely” has been the most popular song on every major Korean streaming service.

To hear more about their new release, Ilgan Sports, an affiliate of the Korea JoongAng Daily sat down with the Wonder Girls - Yeeun, Sunmi, Yubin and Hyerim - for an interview. Here are some edited excerpts.

Q. The new release features a reggae sound. Why did you pick a genre you’ve never tried before?

A. Yeeun: Last year with “Reboot,” we tried to show more of us playing instruments and recording songs as a live band. But it didn’t sound as good as we hoped.

So this time, we tried to write a song that can really benefit from being played live as a band. We didn’t particularly think about reggae to start off but along the way, we added it to give some freshness.

Sunmi: We had various options such as rock, pop and even R&B. Then we decided to pick one with a vote and to our surprise, everyone wanted to try reggae.

Since this genre of music is not mainstream, we were somewhat concerned that it wouldn’t work out.

But at the end of the day, the songs are not completely reggae. They have a reggae rhythm on top of traditional pop tracks. We think the songs will be quite appealing to the general public.

But don’t you worry you’re changing your style too often?

Yubin: We are just trying to do the kind of music that we like.

You could have produced the band music with electronic instruments, but why did you decide to play a band despite the criticisms from last year?

Yeeun: Last year’s title track “I Feel You” is completely artificially produced. It was made possible using MIDI technology. All the members agreed then that we should record the instruments we play, but we couldn’t do this if we were reliant on MIDI. We wanted to show the actual color and tone of our instruments.

Also, I think if we play the instruments ourselves and record like that, our emotions will be translated into the music.

Sunmi: I wanted the songs for our new release to sound as live as possible. Since we played the instruments, I think it sounds more vintage and more real.

The title track is not written by Park Jin-young. That was a surprise change. What made you all decide to write your own title song?

Sunmi: Our agency gives a lot of freedom to its artists. Producer Park Jin-young one day gave us the mission of finding our own color.

After putting our heads together to come up with an answer, we realized that we loved writing songs and playing instruments on our own.

Then we received a long text message from Park saying that he thinks it’s time that we write our own title track.

When we took the result to him, he was very satisfied and I think he began to have faith in us. I think he now sees he doesn’t have to be as involved in our work as before because we can do it ourselves.

You all worked together on this digital single. Were there any problems?

Yeeun: Two members and one composer worked together as a team. Having three people in a team made it easier to collect opinions. There was no trouble. We focused on making music that all members could make together.

Sunmi: We tried to be very flexible from the start so we didn’t get into any problems.

Isn’t it difficult to stage concerts when you are playing as a band?

Yeeun: It’s obviously a constraint, particularly when we’re playing our own instruments. We came up with a separate dance version of the songs for which we don’t play any instruments.

I believe there are many people who want to see us dance. We came up with this idea not to hold more concerts and earn more money but because we believe we should adjust ourselves to be available wherever people want to see us.

Yubin: When we played as a band last year, I played the drums. I like playing the instrument but at the same time, I was feeling impatient to run out and dance. I’ve always loved dancing and I guess it was difficult for me to sit down behind the drums during concerts. As a result, I’m happy that we have a dance version of the song.

Hyelim: Producer Park also told us that it will be good to come up with a dance version of the song that we can share with our fans during our concerts. The dance version also turned out great.