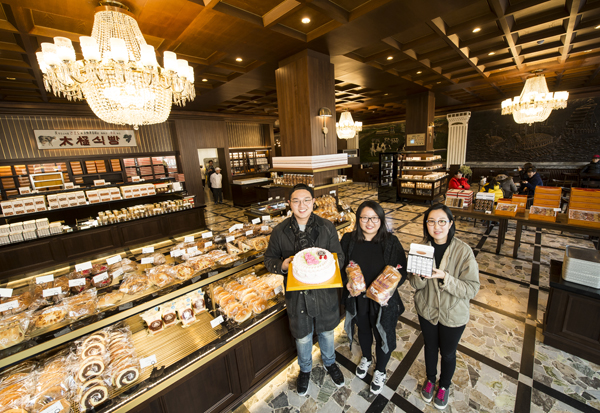 Taegeukdang, the oldest bakery in Seoul, struggled to compete with posh franchise bakeries until Shin Kyung-chul, far left, and his two sisters, Hye-jong, center, and Hye-myung, rejuvenated the business handed down from their grandfather. [OH SANG-MIN]

Park Yong-joon promised himself he would never work in his parents’ fish cake factory.

Growing up in the port city of Busan, Park watched his parents rise at 4 a.m. every day for nearly 30 years to run Samjin Fishcake, which had been passed down from his grandfather.

Knowing how hard the work was, the 33-year-old said he was “afraid” to take over the family business - even though it’s the oldest fish cake company in the country.

“My parents were too busy to attend any of my graduation or entrance ceremonies during the 16 years I was in school,” said Park, speaking softly.

“Family trips often ended abruptly with calls from the company because my parents had to fill in for absent employees. They always carried notebooks and pens wherever they went because they had to be ready to take orders at any time.”

So he fled, choosing to study accounting in the United States.

“I wanted to take root there. I chose accounting because it seemed the most viable option for a Korean to make it big there.”

But around the time he was trying to land a job in 2012, he got a call from his parents. They needed his help to run the family business.

Park soon found himself back in Busan, charged with helping run the company started by his late grandfather Jae-deok in 1953.

It was an unexpected turn of events, but Park decided to give it a shot. His first order of business was bringing computers into the office. Until then, his mother had been doing all the bookkeeping by hand.

As of last year, the company had grown into a nationwide sensation with 16 locations around Korea, 460 workers and 50 billion won in annual sales.

Sales at the Samjin Fishcake branch at the Hyundai Department Store in Pangyo even surpass those of global franchises like the Rome-based Eataly or the Manhattan hit Magnolia Bakery.

In big cities like Seoul, old standards are often overshadowed by what’s hip and new. Samjin Fishcake, however, is one of several historic businesses that are being revitalized by their third-generation owners.

Of all the changes made by Park, he says the biggest contributor to the impressive sales has been the introduction of bakery-style retail spaces, with all different types of fish cakes openly displayed similar to breads or pastries.

Fish cake has never been considered a standalone item. It’s typically served at street stalls as a side to tteokbokki (rice cakes in a red pepper paste) or on a skewer with a cup of hot broth.

In order to show people all the different ways fish cake can be eaten, Park initially transformed the first floor of the company’s headquarters in Yeongdo District, south of Busan, into one of these so-called fish cake bakeries, with nearly 80 types on offer.

The biggest hit was unexpectedly the non-traditional fish cake croquette. Park says the company now sells about 40,000 of them every day.

“I think I found a new market thanks to the fish cake bakery,” he said.

Getting people to take fish cake seriously was one of Park’s earliest and biggest challenges after joining the company.

One of his early victories was getting a bakery-style stall approved in the busy Busan Station.

“The retail space was originally designed for a cafe or bakery, but in my presentation to the station authorities, I explained what a fish cake bakery was, selling them on the idea of this being completely unique to Busan.”

But another risk that Park took involved disassociating Samjin Fishcake with Busan itself.

The port city is known for fish cake, so between 80 and 90 percent of fish cake manufacturers use “Busan” in their branding. At the time, Samjin Fishcake was no exception. Park, however, persuaded his father - the company’s acting president - to replace the city’s name with the company’s name to stress Samjin Fishcake’s heritage.

Park remembers that decision as one of the toughest he’s ever made, but felt it was necessary to stand out from the crowd. He also wanted to distance himself from the less savory reputation of some Busan fish cake makers, who were known to deep-fry fish cakes in bad cooking oil or even use rotted fish.

The name change turned out to be a strong decision, and explosive sales growth followed. .

“My priority is continuing to work with other industries so I can find new markets,” said Park.

“We’re working with a local game company now. When a customer purchases our fish cake at PC cafe, he gets a voucher inside the packaging has a coupon code. When he types in the code, he gets a fish cake within the game, and his character becomes strong after eating it.

“Instant noodles used to be the mainstay snack at PC cafes, but we hope our foray into the market will change that.”

While some third-generation owners like Park were reticent to take the reins of the family business, others like Shin Kyung-chul felt differently.

Shin was tapped to run Taegeuk-dang, the oldest bakery in Seoul, after his father had a stroke five years ago.

“I always have taken pride in the fact that I’m the child of Taegeukdang,” said the 31-year-old.

“My family is just running a bakery but all my friends’ parents liked me a lot just because I’m the son of Taegeukdang,” said Shin.

The bakery is one of Seoul’s most storied businesses, opening in 1946 at Chungmuro, central Seoul, just after the country regained its sovereignty from Japanese colonial rule (1910-45).

It soon became the talk of the town, a beloved celebrity hangout featuring a jukebox and chandeliers that still hang today.

“You wouldn’t imagine how a bakery could become such a trendy place, but they said it was,” Shin said. “They used to have parties and banquets here, and it was a favorite for people going on blind dates.”

The bakery had up to 10 shops across Seoul in its heyday, but Taegeukgang began to go downhill in the mid ’90s with the advent of franchise bakeries.

By the time Shin took over in 2011, only the original location barely scraped by on the business of people in their 60s and 70s who still remembered its glory days.

“I started working as a cashier. Before that, I thought I knew a lot about Taegeukdang but I didn’t. The facilities were so worn-out and the bakery was just managing to stay afloat. I was afraid it wouldn’t survive.”

After many discussions with his family, Shin decided to revamp the inside of the bakery in late 2015. It was the first face-lift in 42 years, since it was relocated to its current location in Jangchung-dong.

Taegeukdang is a privately owned business, but the news of the bakery changing its interior worried many people who valued its historical significance.

Shin, however, was wise enough to maintain the bakery’s identity. The biggest change was allocating some floor space for a cafe, but much of the interior remains the same as ever. The original murals that adorned the walls are still there, and Shin spent hours picking out new chairs and tables that fit the original bakery’s vibe.

The top three floors were also renovated to improve the baking facilities.

“Personally, I’m very sensitive to passing trends but I prioritized keeping the identity of Taegeukdang when I arranged the remodeling,” said Shin.

He ensured that the breads and pastries still taste the same as they did back in the ’40s, but people accustomed to the creations of modern franchise bakeries might find them unfamiliar.

Most of the bakeries recipes were developed to serve Koreans who hadn’t tasted “real” western versions of various baked goods before, and were also hugely influenced by Japanese-style dessert breads with sweet fillings.

Taegeukdang’s recipe for the classic French madeleine, for example, contains pine nuts and raisins instead of lemon peels.

One of the bakeries most classic and best-selling items is the monaka ice cream sandwich, which features thin layers of crisp wafers. It is still made the same way it was 70 years ago.

Another change brought by Shin was increasing its presence online to “deliver its story” to attract younger crowds.

This is a huge change considering Taegeukdang used to have signs declaring “No photos.”

That has led to a new, younger crwod at Taegeukgang, which now is filled with people in their 20s and 30s, who wash down an old-style madeline with iced Americanos.

Other traditions are more subtle. Like his father and grandfather decades before, Shin thanks his employees while giving them their paycheck each month. But his forefathers wrote handwritten notes on paycheck envelopes. “I use computers,” Shin said.

“I’m still young, I’m in my early 30s. I’m hoping to celebrate the 100th anniversary of this place some day,” Shin added.

Above left: Park Jong-su, president of Samjin Fishcake, and his son Yong-joon, vice president. Until Yong-joon joined the fish cake company, Samjin was a mom-and-pop Busan fish cake factory, but it has since become a nationwide brand. This is in large part due to its bakery-style retail spaces, center, where customers are able to hand pick their favorite kinds of fish cake and add them to a tray. Far right: The non-traditional fish cake croquette is the company’s best-selling item. [SAMJIN FISHCAKE, JOONGANG ILBO]