Kakao Bank will do full range of finance activities

Kakao Bank will do full range of finance activities 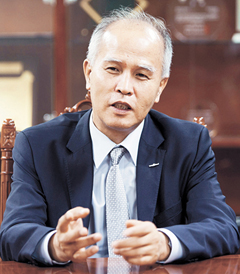 Kakao Bank will enter the card business and investment banking, including sales of securities and asset management, Lee Yong-woo, co-CEO of the internet-only bank told the Korea JoongAng Daily on the sidelines of a meeting with financial regulators on Wednesday.

Kakao plans to offer a comprehensive set of financial services beyond basic banking.

The meeting, held at the office of Kakao Bank in Pangyo, Gyeonggi, was held to brief financial authorities including Financial Services Commission (FSC) Chairman Yim Jong-yong of the progress of the bank as it prepares to launch.

When asked whether Kakao Bank will launch services related to cards and investment, Lee said, “Surely, we do. It’s only a matter of when, not if.”

The remark confirms months of speculation whether the Kakao-led consortium is interested in non-banking services. In February, Kakao denied reports that Kakao Bank is considering adding the card business.

Nonetheless, in March it advertised for workers experienced in the card business.

As for the financial investment, Lee said, “Entry [into investment services] is necessary.”

The moves jibe with the government’s initiative to foster a finance sector built on more advanced technology. The FSC amended rules to allow Internet-based banks to run card and investment businesses earlier this year.

Chairman Yim said on Wednesday that the FSC will simplify the application process for web bank operators to run card and investment-related offerings.

“We will eliminate the preliminary approval procedure,” Yim said, “so, that the operators of web-only banks will directly head to the screening process for final authorization when they are prepared.”

Kakao Bank will apply for final approval in November while K-Bank set its date for August. The regulator also announced its plan to ease regulations placed on internet banks.

Both Kakao and KT say their banks will be able to offer higher interest rates on deposits, lower loan costs and reduced service fees from what they will save in labor and overhead costs that would otherwise be used to maintain a physical bank.

K-Bank said an expansive network and potential user information can be derived from the telecom company and its partner BC Card.

Conversely, Kakao Bank vowed to leverage its KakaoTalk platform by enabling members from group chat rooms to open group bank accounts and pay interest in different forms such as digital currencies that can be used on Kakao Talk or MelOn, a music streaming service owned by Kakao.