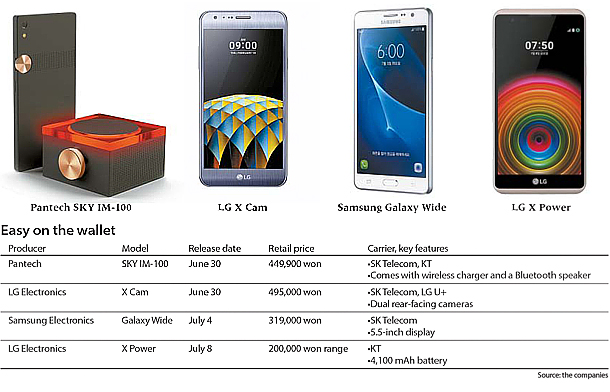 In the past weeks, Samsung Electronics has released the Galaxy Wide, Pantech the SKY IM-100, and LG Electronics four different models: the X Skin, X Cam, X5 and X Power. They all retail from 200,000 won ($170) to 400,000 won and subsidies from telecom operators make them even cheaper.

Smartphone producers tend to struggle in the period between February, when they showcase their latest products at the annual Mobile World Congress, and September, when IFA, another annual consumer electronics show takes place. During the summer lull, they have introduced lower-priced models.

But this year those cheaper smartphones come with features expected from premium models. Many consumers no longer feel the need to pay for premium models when cheaper phones are good enough.

After Pantech launched its SKY IM-100 through SK Telecom and KT on June 30, an estimated 8,000 units were sold over the past weekend. In the preorder period before the release, Pantech - once the third-largest smartphone maker in Korea - received 7,000 advance orders.

The 5.15-inch phone with 32 gigabytes of storage retails for 449,900 won, but thanks to telecom subsidies, customers only need to pay 200,000 won even if they choose the lowest monthly plan at 29,900 won. SK Telecom and KT are offering 330,000 won subsidies, the highest possible under the current regulation.

The company said it supplied 20,000 units to SK Telecom and 10,000 to KT last Saturday and Sunday and its factory in Gimpo, Gyeonggi has entered into full operations in case additional orders are placed.

“Initial sales are quite upbeat,” said a Pantech spokesman. “We expect to achieve the sales target for this year of 300,000 units.”

Since June 24, LG has been releasing new models every week under its mid-end X series. The X is followed by words that represent the key feature of each phone. For instance, the X5 boasts a 5.5-inch screen and a thin and lightweight body. X Cam is equipped with dual rear-facing cameras - one 13 megapixel camera and a 5 megapixel wide-angel camera - for users to choose between, whereas X Power has a large-capacity battery at 4,100 mAh.

“The X series is a customized lineup for consumers,” said Cho Joon-ho, CEO of LG Electronics, on Monday. “We hope to take leadership of the budget phone market with products that satisfy varying needs of customers.”

Samsung has been selling the Galaxy Wide smartphone exclusively through SK Telecom since Monday. An upgrade of the Galaxy On7, which was only available in markets abroad including India, the new phone has a 5.5-inch high-definition screen and 16 gigabytes of storage, double the Galaxy On7’s.

After introducing the Galaxy Note 7, its flagship phablet, in New York on Aug. 2, Samsung is expected to come up with a budget phone version.