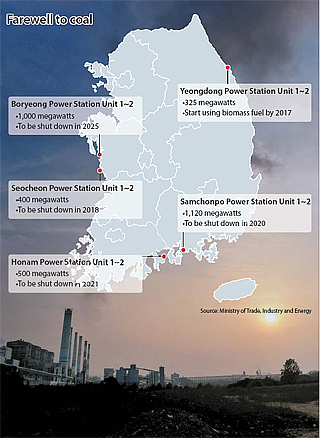 The government announced ways to cut back fine dust in the air, largely by tackling coal-fired power plants.

The Ministry of Trade, Industry and Energy said Wednesday it will invest a total of 10 trillion won ($8.6 billion) to improve or shut down some coal-fired power plants and reduce fine dust emissions by 24 percent by 2030.

“There is a no doubt that the energy industry was a driving force of the Korean economy for a long period of time, but it is also true that our efforts to consider environmental issues were not sufficient,” said Trade Minister Joo Hyung-hwan at a meeting with CEOs of local power plants operators on Wednesday. “I believe this is the time for us to focus on developing an eco-friendly energy sector.”

Shutting down old plants and retrofitting newer ones are part of the plan.

Currently, there are 10 coal-fired power plants that have been operating for more than 30 years, and the government will shut eight of them by 2025 and convert two plants to run on biomass fuel.

Eight plants that have operated for more than 20 years will go through retrofitting - the replacing of key parts such as turbines - to reduce emissions. The Trade Ministry said the retrofitting process costs 10 billion won to 25 billion won for each plant.

The government will invest 240 billion won in 35 newer power plants to cut emissions in various ways.

New coal-fired power plants will have to comply with tougher emissions standards.

For 11 power plants nearing completion, the emissions standards are 200 percent to 300 percent tougher than existing plants. The government will apply the toughest global standards for nine plants that are just being built.

“We will strengthen environmental control facilities in the South Chungcheong region, where a large number of coal-fired plants are located starting from 2017,” said Joo.

Currently, 26 out of Korea’s 53 coal-fired power plants are located in South Chungcheong and the government plans to reduce fine dust emissions by 34 percent by 2030, which is 10 percentage points higher than the 24 percent target for the whole country.

The government will prohibit any new coal-fired power plant projects.

After these plans go into effect, the government expects that it will be able to reduce the nation’s sulfur dioxide emissions by 16 percent and nitrous oxide emissions by 57 percent. The proportion of electricity produced by coal will decrease from 28 percent of the total electricity generated in 2015 to 26.2 percent in 2029.

This was the second time this week that the government emphasized the need for new energy industries.

The Trade Ministry announced Tuesday that it will invest some 42 trillion won through 2020 to develop new energy industries and ease regulations on the renewable energy sector.