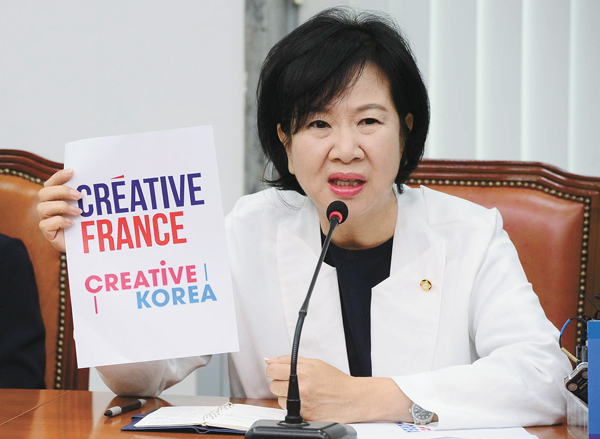 Rep. Sohn Hye-won of the Minjoo Party of Korea said during the interim leadership meeting in the morning that the government’s “Creative Korea” slogan and its logo design plagiarized the “Creative France” campaign of Business France, a French national agency promoting international investment in the country.

“Using the word ‘creative’ in front of the name of the country in the slogan, and using the red and blue colors in the logo design, are blatant acts of plagiarism,” Sohn said. “It is especially embarrassing that the plagiarized slogan is celebrating creativity.”

Sohn, 61, is a renowned designer, creative director and branding specialist. She was the chief publicist of the Minjoo Party’s April general election campaign and she won her first lawmaker seat through the election to represent Mapo B District.

She and the Minister of Culture, Sports and Tourism Kim Jong-deok both studied design at Hongik University and they also both served as professors of their alma mater before starting their new careers in public offices.

Sohn said the Park administration has spent 3.5 billion won ($3 million) on the campaign and much more is expected to be spent.

“They said the slogan and logo will be used to promote Korea during the Rio Summer Olympics and the Pyeongchang Winter Olympics,” she noted, “but it must be removed right now.”

The Ministry of Culture, Sports and Tourism announced on Monday that “Creative Korea” will be the new national brand of Korea. It was designed to replace “Dynamic Korea,” which was created in 2002.

“It is a national disgrace that the government copied the slogan and design of another country,” said Rep. Woo Sang-ho, floor leader of the Minjoo Party. “We will find out who is responsible and hold them accountable.”

The Ministry of Culture, Sports and Tourism rejected Sohn’s accusation of plagiarism. “The word ‘creative’ is not registered as a brand,” said Park Young-gook, culture and arts policy director of the ministry. “We are not only one using it. Many others, such as Creative Britain, Creative America and Creative Africa, used it for various campaigns.”

Park also said the same red and blue colors were used because they were based on the national flag. “The French flag is red, blue and white and the Korean flag uses red, blue, white and black.

“So the color spectrum is limited,” he said, adding that the two logos use different design fonts. “In conclusion, it is wrong to say our campaign is a copy just because it used the word and same colors, because the font is different.”