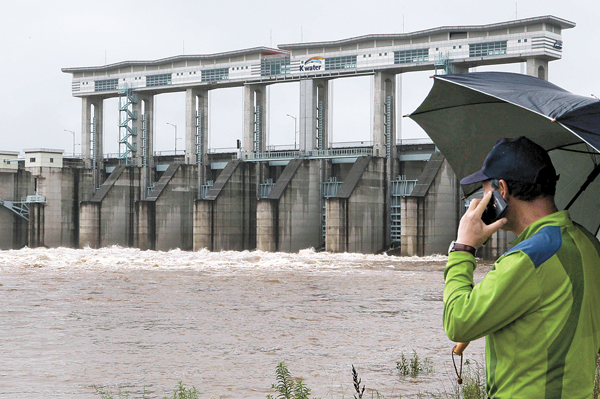 A resident looks at water discharged from Gunnam Dam on Wednesday after North Korea failed to tell South Korea it was releasing water from its dam upstream. [CHON MUN-GYU]

In May, the North also released water from the dam without advance warning, causing property damage for people living along the Imjin River south of the border.

The South Korean military said the North was trying to control the water level after heavy rain hit the area a day before. It didn’t consider the action a form of attack to cause damage.

Having confirmed an increase in the flow of water, the military informed K-Water, the state-run agency that controls dams, and the Yeoncheon County office in Gyeonggi at around 7:20 a.m. The authorities issued evacuation orders for people residing near the Imjin River.

To prevent flooding in downstream areas in Yeoncheon County and Paju in Gyeonggi, South Korea built the Gunnam Dam in 2010 to handle an inflow of up to 11,300 tons of water per second.

But concerns are mounting among Yeoncheon residents that although the Gunnam Dam can hold up to 71 million tons of water, the North’s Hwanggang Dam can hold five times more with a 350-million-ton capacity, meaning the North could inflict serious damage if it intended to.

“If the North discharges water during the monsoon season without prior notification, residents near the Imjin River in Yeoncheon and Paju will not be spared from flood damages,” said a Yeoncheon resident surnamed Kim, 65.

The two Koreas struck an agreement in October 2009 mandating that the North provide notice of water releases, one month after six South Koreans were killed in a flash flood caused by the North’s release of water from the Hwanggang Dam.

After the 2009 agreement, North Korea occasionally informed authorities in the South of planned water-releases through a military hotline set up across the border. The hotline, however, was severed after the closure of the Kaesong industrial complex in February. The administration of Park Geun-hye closed the complex saying the money North Korea made from it helped its nuclear program.

The last time the North informed the South of a planned release was in July 2013.

The South Korean government on Wednesday urged the North to follow the joint 2009 agreement.