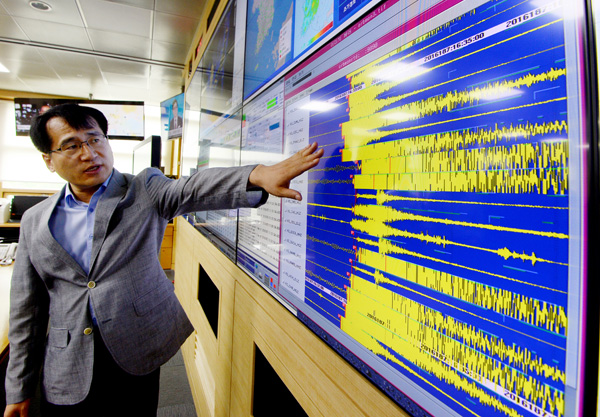 A day after a 5.0 magnitude tremor was detected 52 kilometers (32 miles) off the coast of Ulsan’s Dong District, an official of the Korea Meteorological Administration’s Earthquake and Volcano Bureau explains about the earthquake at its headquarters in Dongjak District, southern Seoul, on Wednesday. [NEWSIS]

A 5.0 magnitude earthquake was detected off the coast of Ulsan Tuesday evening, leading to immediate concerns over the safety of the nuclear power plants in the area.

Tuesday’s quake was Korea’s fifth largest since the country began keeping record in 1978.

The earthquake was detected in waters 52 kilometers (32 miles) off Ulsan at 8:33 p.m. and the tremor was felt across Korea’s southeastern region including Busan and the Gyeongsang region, which has a high concentration of nuclear power plants.

Nuclear safety authorities said that there was no immediate damage incurred in the nuclear power complexes in the area. 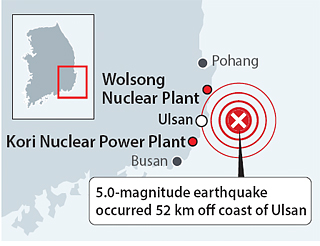 But with eight nuclear reactors located in Ulsan and Busan, there was an increase in anxiety among residents over a potential nuclear accident such as the 2011 explosion of the Fukushima Daiichi nuclear plant, caused by an earthquake and tsunami.

“I live on the 23rd floor and the building shook for several seconds and I was shocked,” said Ms. Bae, a 43-year-old Busan resident. Bae was preparing dinner when she felt the tremor, which rattled the windows.

Bae, who lives in Gijang County, not far from the Kori Nuclear Power Plant, says a day after the tremor, she is scared of a recurrence.

“After the earthquake, I wondered whether the nuclear power plant, which is located not very far from our apartment, is indeed really safe,” she admits.

“Since we don’t know when another earthquake might strike, I discussed with my husband about moving to Changwon or somewhere further inland.”

Although the 38-year old Kori 1 will be shut down next June, the southeast region is more densely studded with nuclear reactors than even the Bruce nuclear complex in Ontario, Canada, which has eight reactors on Lake Huron.

“I knew very well from seeing on news that the nuclear disaster in Fukushima [in March 2011] was caused by a tsunami resulting from an earthquake,” said a 30-year-old woman who lives in Changwon, South Gyeongsang. “Even if you live far away from nuclear facilities, a single leak can easily lead to the spread of radiation.”

“After conducting a safety check of the nuclear facilities, we concluded there was no damage from the earthquake,” the Korea Hydro and Nuclear Power Corporation, the state operator of nuclear reactors, said Wednesday.

“Aside from Kori 1, which is under maintenance, the other nuclear reactors are operating normally.

The reactors have a mechanism to halt operation in the case of large earthquakes.

The Nuclear Safety and Security Commission said Wednesday said that the Wolsong Nuclear Plant, which was closest to the epicenter of the quake, was not impacted by the tremor.

Experts warn that Korea needs to be prepared for future quakes.

“Historically, there are records that earthquakes exceeding a magnitude of 6.5 occurred on the Korean Peninsula,” Son Moon, a geological environment professor at Pusan National University, said. “If the epicenter of a quake exceeding 6.0-magnitude is beneath land, it could be a catastrophe.”

Son continued, “The government is planning to draw up an active fault map next year, but this process can take up to 20 years. There is a possibility of a large-scale earthquake occurring in Korea, so we need to prepare quickly.”