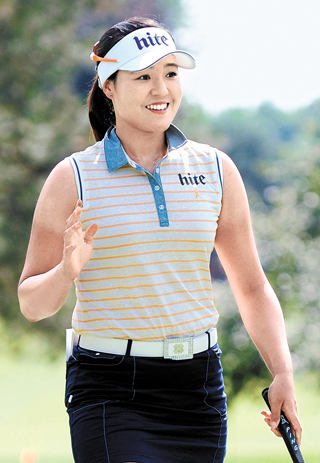 Chun In-gee is the defending champion of the U.S. Women’s Open. The four-person Korean Olympic team will be chosen based on rankings after the event. Chun is currently third in Korea. [AP/NEWSIS]

The two teenage sensations have won the past three majors heading into this week’s U.S. Women’s Open with the 19-year-old Ko taking two and the 18-year-old Henderson following last month with a thrilling playoff victory over Ko in the KPMG Women’s PGA Championship in Washington that could set the stage for a heated rivalry for years to come.

Fittingly, the two will be together when this year’s third major starts at the U.S. Women’s Open at CordeValle on Friday, less than 100 miles south of San Francisco. Ko and Henderson will play the first two rounds with 21-year-old Lexi Thompson, who is ranked fourth in the world, in the marquee group of the tournament.

“It’s great to watch them both on the golf course and their attitudes and just their demeanors on the golf course,” Thompson said. “They’re aggressive players, and just consistent overall. You can’t really even find a weakness in their game, and that’s why they’re so good.”

The top three ranked players in the tournament - No. 3 Park In-bee will miss the Open because of a thumb injury - will face stiff competition in the 156-player field that includes nine previous champions, including last year’s winner, Chun In-gee.

This will be the final U.S. tournament for Pak before she retires. Her win at Blackwolf Run in Wisconsin 18 years ago helped spark the recent South Korean dominance of the LPGA Tour. Seven of the last 11 winners of the U.S. Open have come from South Korea.

“After I came and after I start winning, I have this great success, everybody was thinking, I can do that,” Pak said. “Giving a lot of confidence, built confidence for them. So they’re here, they make it a dream, they make it possible. So I think I was part of it.”

But when the tournament starts, much of the focus will be on Ko and Henderson, who hope to build off the drama they staged last month when Henderson tracked down Ko in the final round with a long eagle putt and a tough par before winning in a playoff by coolly stuffing her approach into 3 feet.

That gave Henderson her first career major as she tries to match Ko, who had won the previous two with her victory at the ANA Inspiration earlier this year after winning the Evian Championship in 2015.

“Lydia Ko is amazing,” Henderson said. “She’s an inspiration to all of us girls out here, and I think everyone in the world, basically. She’s done amazing things in her career and she’s only a couple months older than I am.”

Henderson followed that up with her third career tour win when she repeated as champion at the Cambia Portland Classic and can surpass Ko as the youngest player with two majors with a win this week.

This marks just the third time the U.S. Women’s Open has been played in California and this is the highest-profile event to be played at the Robert Trent Jones Jr.-designed course that opened in 1999. The course, located in the foothills of the Santa Cruz Mountains, plays as a par 72 over 6,784 yards, although it could be a bit shorter this week depending on tee locations.

The course finishes with a par-5, 528-yard hole that features a water hazard near the green and the possibility of trying to reach the green in two shots for players looking to close a gap on the final day.

The tournament is also the final one to determine who will qualify for the Olympics next month.