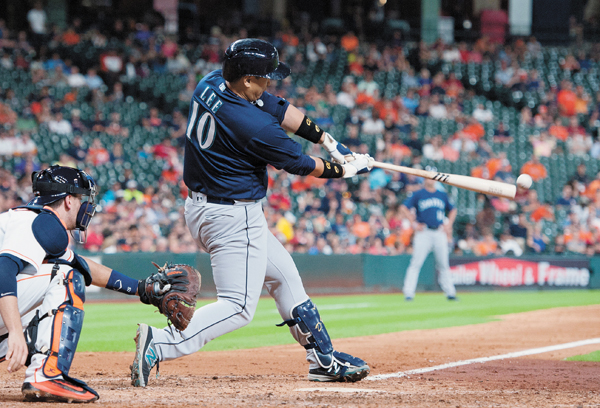 Lee Dae-ho of the Seattle Mariners hits a ground ball in the sixth against the Houston Astros on Thursday. Earlier in the game, Lee hit his 12th home run of the season. [AP/NEWSIS]

During an MLB game against the Houston Astros at Minute Maid Park, Houston, Lee batted sixth for the Mariners while playing first base. His dinger came at the top of the fourth inning when Lee drove a 90-mile-per-hour four-seam fastball by Astros pitcher Mike Fiers. His effort, however, came up short as the Mariners conceded four runs in the latter half of the game to lose 9-8.

His towering hit went over the right field. His run out of the solo homer was the last run that the Mariners scored in the fourth during its attempt to narrow the deficit. The Mariners, who were behind 5-0, scored four runs in the fourth inning alone to bridge the gap with the Astros.

Lee went 1-for-5 Thursday, adding a run batted in (RBI) and a run scored each to his season records. This is the sixth straight game during which Lee had at least one hit and the 13th consecutive game he has started for the Mariners. 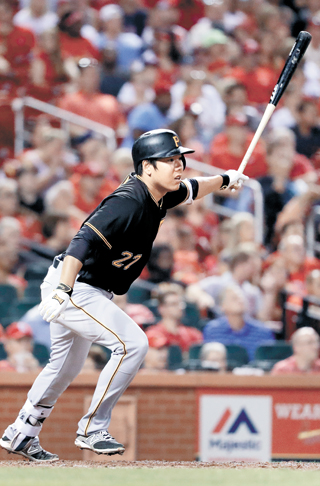 Pittsburgh Pirates’ Kang Jung-ho follows through on a two-run double on Thursday against St. Louis Cardinals. Despite a recent sexual assault allegation, Kang played in Thursday’s game and hit a double for the Pirates.[AP/NEWSIS]

Lee joined the Mariners with a minors contract and an invitation to the spring camp before the season started. In the spring camp, Lee proved himself as a viable majors material to the Mariners manager Scott Servais and the rest of management staff to be included in the team’s opening roster.

Lee was brought up to the big league in order to platoon with Adam Lind, who essentially secured his starting position on the first base after he joined the Mariners prior to this season. Lind, who bats left, got the majority of the playing time on the first base, while right-handed Lee saw less playing time as he got to only play against southpaw pitchers. Despite this, Lee’s been batting as well as Lind, if not better.

Elsewhere in the majors, Pittsburgh Pirates’ Kang Jung-ho, who is currently embroiled in controversy with a sexual assault allegation, smacked a hit for the Pirates against the St. Louis Cardinals. Batting fourth and playing third base in the road game, Kang’s game-winning double came at the top of the seventh when the Pirates were behind 5-4. His hit brought home David Freese and Andrew McCutchen and the Pirates reclaimed the lead. He scored during the next play to extend the Pirates’ lead to 7-5, the final score.

In Los Angeles, Baltimore Orioles outfielder Kim Hyun-soo went 2-for-7. Batting second, during the team’s 6-4 win over the Los Angeles Dodgers through extra innings, the Korean drove a single during his first at-bat of the day. Kim added yet another single during his next at-bat at the top of third inning. His single allowed Adam Jones to reach third, and he eventually scored a run during the next play to even out the game at 2-2.