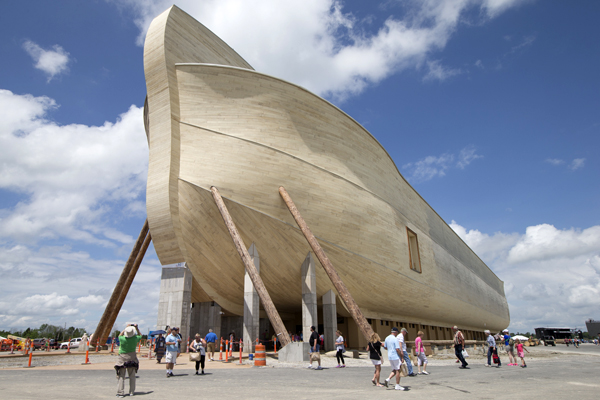 Visitors pass outside the front of a replica Noah’s Ark at the Ark Encounter theme park during a media preview day, Tuesday, in Williamstown, Ky. The park will open to the public on Thursday. The Christian group behind the 510 foot-long wooden ark says it will demonstrate that the stories of the Bible are true. Its construction has rankled opponents who say the attraction will be detrimental to science education. [AP/NEWSIS]

WILLIAMSTOWN, Ky. — A 510-foot-long, $100 million Noah’s ark attraction built by Christians who say the biblical story really happened is ready to open in Kentucky this week.

Since its announcement in 2010, the ark project has rankled opponents who say the attraction will be detrimental to science education and shouldn’t have won state tax incentives.

“I believe this is going to be one of the greatest Christian outreaches of this era in history,” said Ken Ham, president of Answers in Genesis, the ministry that built the ark.

Ham said the massive ark, based on the tale of a man who got an end-of-the-world warning from God about a massive flood, will stand as proof that the stories of the Bible are true. The group invited media and thousands of supporters for a preview Tuesday, the first glimpse inside the giant, mostly wood structure.

The ark will open to the public Thursday and Ham’s group has estimated it will draw 2 million visitors in its first year, putting it on par with some of the big-ticket attractions in nearby Cincinnati.

The group says the ark is built based on dimensions in the Bible. Inside are museum-style exhibits: displays of Noah’s family and rows of cages containing animal replicas, including dinosaurs.

The group believes that God created everything about 6,000 years ago — man, dinosaur and everything else — so dinosaurs still would’ve been around at the time of Noah’s flood. Scientists say dinosaurs died out about 65 million years before man appeared.

An ark opponent who leads an atheist group called the Tri-State Freethinkers said the religious theme park will be unlike any other in the nation because of its rejection of science.

“Basically, this boat is a church raising scientifically illiterate children and lying to them about science,” said Jim Helton, who lives about a half-hour from the ark.

Ham said the total cost of the ark surpassed $100 million, a far cry from a few years ago, when fundraising for the boat was sluggish and much larger theme park plans had to be scaled back.

Millions of people first learned about plans for the ark during a debate on evolution between TV’s Bill Nye “the Science Guy” and Ham in early 2014.

A few weeks later, a local bond issuance infused tens of millions of dollars into struggling fundraising efforts. And earlier this year, a federal judge ruled the ark could receive a Kentucky sales tax incentive worth up to $18 million while giving a strict religious test to its employees.

Months later, the tax incentive ruling still has some opponents of the boat scratching their heads.

“It’s a clear violation of separation of church and state. What they’re doing is ... ridiculous and anywhere else, I don’t think it would be allowed,” Helton said.

The court ruled in January that Kentucky officials could not impose requirements on the ark that were not applied to other applicants for the tax incentive, which rebates a portion of the sales tax collected by the ark. That cleared the way for the group to seek out only Christians to fill its labor force. New applicants will be required to sign a statement saying they’re Christian and “profess Christ as their savior.”

As much of a boon as the $18 million tax break would be, Bill Nye’s agreeing to debate Ham may have helped turn the tide of years of sluggish fundraising.

Nye, a high-profile science advocate and former TV personality, debated Ham on evolution and drew a huge online audience. Nye later said he didn’t realize the attention it would draw and said he was “heartbroken and sickened for the Commonwealth of Kentucky.”