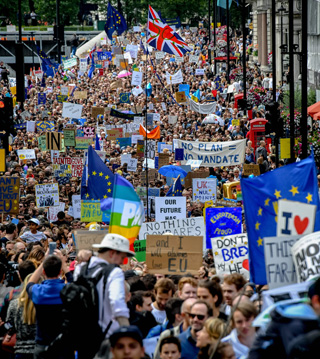 This is a vicious cycle. The financial crisis ignited by the real estate bubble burst in the United States spread to Europe, causing fiscal and social crisis and leading to the European migrant crisis. In the process, public sentiment grew angry around the world and political upheavals are occurring. The United Kingdom, where honor and cause were the highest value, went on to vote for withdrawal from the European Union to protect its own interests, and the aftermath of Brexit is hard to predict. The Scotland’s independence has become a real concern, and the prospect of withdrawal of other major members such as the Netherlands, France, Italy, Sweden and Denmark endangers the existence of the European Union.

The political impact is expected to bring unprecedented shockwaves not only to the global financial system but to the real economy as well.

Brexit implies far more challenging dilemma than other financial crises. If the policy collaboration of different countries works successfully to minimize the economic impact of Brexit, other EU member countries that have assumed the cost of Britain’s withdrawal are likely to leave the union as well. But if the damage on the UK economy as a result of Brexit is left unmanaged as a retaliation and to discourage further withdrawal, it would seriously hurt the global economy.

Furthermore, UK’s fallen status as a financial center and restructuring of the financial industry would unleash contest for hegemony between the United States and China as well as other key currency holders such as Germany and Japan. Certain EU members that have been struggling with financial crisis, namely Greece, Italy and Portugal, would suffer more from the damage of Brexit, and it would be a major obstacle to EU’s joint response to the crisis. The economic dilemma associated with Brexit require prior resolution of complicated political issues on the global economic system.

In fact, as the origin of free trade theories in the early 19th century, the United Kingdom planned the new international financial system after World War II, architecting the Bretton Woods system, and leading free trade and globalization. Moreover, when the U.S. Congress scrapped the establishment of an international trade organization, Britain revived the General Agreement on Tariffs and Trade (GATT) and established the foundation for global trade system. It is an irony of history that the United Kingdom wants to leave the European Union, which proposed an exemplary model of economic integration beyond trade, possibly providing a reason to dissolve the economic community. With UK’s departure, the European Union has lost a core member and its relative status has been reduced. Here, we need to note that the U.S.-centered global economic order is further strengthened as we view the international community.

The global market barely returned to a stable state with unpreceded quantitative easing, and the Brexit variable is likely to be a turning point in the ongoing global crisis. The sudden rise of Yen value shook up the foundation of Abenomics, and it is inevitable for the U.S. Fed to delay interest rate increase. Emerging markets, which make up 60 percent of Korea’s export, could be faced with serious capital outflow due to increased short-term volatility. Shrunk demand as a result of global low-growth trend would make it even harder to resolve various industrial structural issues.

Possibility of Korea’s monetary stringency could also be a grave obstacle to the urgent restructuring and market boost measures.

However, withdrawal from the EU, an economic community that guarantees free movement of capital and people within the region, would inevitably have negative impact on the bilateral trade and investment between the United Kingdom and the European Union. Korean industries also need to prepare for relocating investments from the UK.

Now, world leaders need to sever the link of this vicious cycle. The free movement of trade, capital and people that the Bretton Woods system has accomplished for the past 70 years is in jeopardy in the face of “Trump phenomenon” around the world. Korean economy, which grew miraculously along with free trade system, is faced with a structural crisis. Therefore, the Korean government and politicians should be as alert as when we dealt with the 1997 financial crisis and operate an emergency management system using full capacity. Korea is already burdened with structural social changes from restructuring cases and aging of the population, and we now have to get through the extreme competition for survival in the international community amid storms of protectionism and nationalism.

As the RMS Titanic was sinking, he ordered the crewmembers “Be British” and devoted himself to safety and escape of the passengers until he perished. As the ship named Republic of Korea is reeling in the sea, we desperately need the captain’s leadership and efforts of the politicians, government and citizens to “Be Korean.”


*The author is a professor at the Graduate School of International Studies of Seoul National University.