This summer, it’s all about animation

This summer, it’s all about animation 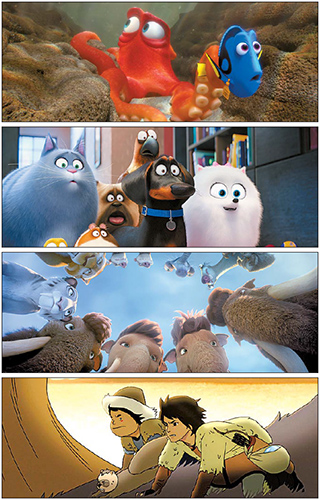 Stills from various animated feature films that will be slated to open sometime this month and next month. From top: “Finding Dory,” “The Secret Life of Pets,” “Ice Age: Collision Course” and “Kai.” [EACH DISTRIBUTOR]

Theaters around the country will be filled with big-budget animated features this summer, some of which feature work by Korean animators and voice actors.

According to CJ CGV, theaters see their highest attendances in July and August. Most schools go on a month-long summer break starting in mid- July, and people unable to escape the city often spend time in icy, air-conditioned theaters to beat the sizzling heat.

Unlike past years, however, most will probably be checking out at least one animated flick.

The most anticipated is likely “Finding Dory,” the sequel to the 2003 smash “Finding Nemo,” which hit local theaters on Wednesday.

The film by Pixar Animation Studios was originally slated to open on Thursday, but its release date was moved up to capitalize on the buzz the film is creating in the North America.

“Finding Dory” saw a massive $136.2 million debut on June 17 in the North America, breaking the opening-day record for an animated film last set by “Shrek the Third” (2007).

Oh helped animate the octopus Hank for “Finding Dory.” He says he was one of 40 artists that worked exclusively on the cephalopod.

He says that while “Finding Dory” has a similar feel-good message to the first film, its focus is a little different.

“If ‘Finding Nemo’ was a story about fatherhood, ‘Finding Dory’ is about how little kids change and grow,” said Oh in an interview with the JoongAng Ilbo late last month.

“Dory struggles with short-term memory loss, and if we think of it as a disability, the film can be seen as the story of a little kid overcoming obstacles and learning to navigate the world.”

Another upcoming feature is the fifth and final installment of the “Ice Age” series, “Ice Age: Collision Course.”

The first “Ice Age” premiered in 2002, and few animated feature franchises have been as prolific.

As always, the fifth “Ice Age” opens with the squirrel Scrat’s obsession with acorns. This time, his tireless pursuit of the treat puts the entire solar system in peril, and Scrat’s best friends have to venture outside earth to save it.

Targeting younger audiences, many foreign animated films use different voice actors to redo dialogue in local languages rather than using subtitles, and “Ice Age: Collision Course” is no exception.

For its Korean release, the film features a stellar lineup of veterans like Bae Han-sung and Jang Kwang.

It’s a strategic choice, as other big animated features recently have opted to have K-pop singers or comedians do voices. The stars bring publicity, but are often criticized for being hard to understand or mumbling.

That won’t be a problem for Bae and Jang, both of whom have been in the business for nearly four decades.

“The film can get a quick burst of attention by using young and famous celebrities but no one can do it better than voice actors,” said Lee Sook-hee, the head of the animated series’ importer Ega Pictures.

One of the most highly recommended choices for families is “Norm of the North,” which opens July 27.

The film focuses on the English-speaking polar bear Norm, who tries to stop the rich Mr. Greene from building a mansion in the Arctic.

“Norm of the North” received an official stamp of approval from the Korea Green Foundation, an environmental group.

Young animal lovers will appreciate “The Secret Life of Pets,” which opens Aug. 3.

It tells the story of Duke, a loyal dog whose daily routine revolves around waiting for his owner Katie - until he stumbles on a group of abandoned pets led by the white rabbit Snowball.

Produced by Illumination Entertainment, best known for the “Despicable Me” series, the latest film is loaded with cute, quirky characters.

A poodle, for example, feigns a love for tasteful classical music when its owners are around, but turns on ear-splitting rock music as soon as they leave.

For those with more domestic tastes, there’s the Korean animated feature “Kai,” which opens Aug. 18.

The film follows a young boy who sets off to defeat the Queen of Snow after she freezes his neighborhood.

“Kai” is the first project by Lee Sung-gang since his popular “Yobi, The Five-tailed Fox” (2006).

The latest film was screened at the non-competition section at the Annecy International Animated Film Festival in June held in Annecy, France.

It was reportedly well received at the animation-only event, which is considered comparable in prestige to the Cannes Film Festival