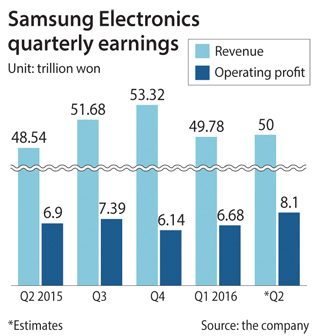 The analyst consensus from stock information provider WISEfn released a day before was 7.6 trillion won, 6.6 percent lower than the actual result.

Operating profit in the April-June period shot up 17.4 percent from a year earlier and revenue also advanced 3 percent over the same period to 50 trillion won. The guidance did not break down earnings by business divisions. Full second-quarter data is set for release on July 28.

“The Information Technology & Mobile Communication [IM] division as well as consumer electronics products including TVs performed better than expected,” said a Samsung spokesman. “It’s not easy to pump up revenue when the global economy remains sluggish.”

Operating profit for the IM division was estimated in the 4.3 trillion won range, according to Samsung insiders, and that is highest since the second quarter of 2014, when it tallied 4.42 trillion won. Samsung relies heavily on its IM division for profits. In the first quarter, that division’s profits accounted for 58.2 percent of total operating profit.

Galaxy S7 smartphones have sold approximately 26 million units since the model’s launch on March 11 and 16 million units are assumed to have been sold between April and June. On the back of its sleek design and waterproof feature, the S7 has become as popular as the S4, Samsung’s best seller ever.

But analysts point out a hidden contributor to the impressive margin: reduced spending on marketing.

“It’s hard to credit Samsung for an earnings surprise,” said Lee Seung-woo, head of equity research at IBK Securities, “given that the company saved massive amounts of marketing expenditure because it didn’t have to spend a lot when Apple’s iPhone SE turned out to be less successful than expected.”

The fact that the S7 Edge model, with a display that curves on two sides, accounted for more than half of all sales of the S7 line also helped Samsung boost its margin. An S7 Edge with 32 gigabytes of storage, for instance, retails for 924,000 won, 11 percent more than the standard S7.

Dismal sales of the S6 are blamed for Samsung’s failure to accurately forecast the demand for the Edge model and to ramp up production.

Brokerage houses were not optimistic about Samsung’s second quarter at the beginning. Three months earlier, the analysts’ consensus was as low as 5.86 trillion won for operating profit. They scrambled to revise upward their forecast as the earnings guidance date neared. Still, only several securities houses including IBK, NH Investment and Hi Investment anticipated a level above 8 trillion won.

It won’t be easy for Samsung to match its performance in the third quarter, however. Samsung’s upcoming Galaxy Note 7 phablet, set to be showcased on Aug. 2, will have to compete against a much-anticipated iPhone 7, scheduled to debut in September. Samsung will inevitably have to spend more on marketing.

Shares of Samsung picked up 2 percent to close at 1,450,000 won on Thursday on the upbeat result.

SK Telecom net profit down to ￦947.8B in 2022 but beats expectations